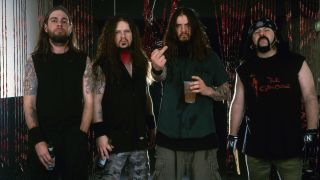 An undisputed metal milestone from the decade that made life somewhat difficult for heavy music, 1992’s Vulgar Display Of Power turned Pantera into megastars. Listening to it today, it’s not fucking surprising. All the riffs, all the anthems, none of the fannying about… but somehow it still seems essential to rank its contents in order of preference. So that’s what we’ve done.

Often overlooked, Live In A Hole is a slow-burning, murderous affair that doesn’t really have a chorus: instead, its lacerating hooks come from Dimebag’s steady succession of devastating riffs, the weird, loping groove in the verses and, predictably, the guitarist’s blistering solo midway through. A tale of crippling isolation and resentment, it boasts one of Phil Anselmo’s most incisive and (seemingly) personal lyrics… but, in fairness, it’s no Mouth For War, is it?

Twenty-four years after its release, Vulgar Display Of Power is still startling, if only for the sheer number of colossal riffs that Pantera had at their disposal in 1992. Regular People crams in more sublime six-string neck-wreckers than most – at least three before Anselmo starts singing, in fact – but also falls some way short of the insane levels of catchiness on offer elsewhere on the album. Dimebag’s main solo is a particularly inspired and subversive one, however.

9) No Good (Attack The Radical)

A steel-plated rip-snorter by anyone else’s standards, No Good has a killer chorus, several face-flaying riffs and levels of muscular momentum that still take the breath away, 24 years later. One of the more subtly melodic tracks on VDOP, it only appears so far down this list because of the staggeringly high standards exhibited elsewhere.

8) By Demons Be Driven

Cynics may like to portray Pantera as meathead metalheads perpetuating a code of nuance-free brute force, but the rhythmic tricks and melodic devices they were pulling out of their whisky-sodden bag on VDOP marked them out as much, much more than that. By Demons Be Driven is a master class in extreme focus and precision, as its lumbering groove and squalling, bug-eyed chorus conspire to lure Satan up from the fiery depths. More importantly, that final riff is ridiculously fucking heavy.

Erupting like a riot as This Love fades into dewy-eyed oblivion, Rise is arguably VDOP’s nastiest track, outstripping even Fucking Hostile for balls-out, turbocharged speed metal intensity. The verse riff is a prime example of Dimebag’s unerring ability to devise inventive and irresistible grooves, and the chorus is about as straightforwardly exhilarating as it gets. As a side note, Phil Anselmo could probably do with reminding himself of his pro-unity war cry: ‘Every creed and every kind, to give us depth for strength…’ Just saying etc.

One of modern metal’s biggest problems is the huge gap between what bands say and what they’re actually capable of delivering. A New Level is that rare beast: a heartfelt manifesto that lives up to the imperious menace of its lyrical hook. In 1992, metal was flailing around in grunge’s tailwind, looking for new ways to stay relevant: Pantera nailed the only way forward with this song alone, and discerning metalheads knew immediately that our beloved genre was in safe hands.

A song that is so familiar and, if we’re honest, overplayed that it has become etched into our brains and must surely rank with the likes of Sweet Child O’ Mine and Enter Sandman as one that none of us ever really need to hear again. But metalheads will always want to bang their heads and stomp like nutjobs to this ingenious exercise in simplicity and brute force, because Walk – as you may be aware – swings like a megalodon’s ballbag. Given recent events, Phil Anselmo’s demands for “respect” ring a teensy bit hollow, but still… it’s a heavy metal anthem, innit?

The second best ballad on VDOP is still better than 99% of everyone else’s ballads. That sublime melodic opening confirmed that Pantera were drawing from metal’s cerebral urges as much as from its aggressive core, and Phil Anselmo has seldom sung with any more feeling or conviction. What makes Hollow particularly special is the way it morphs from grandiose melancholy to its final, furious, bone-powdering conclusion, wherein Dimebag, Vinnie and Rex whip up a storm of razor-sharp riffs that brought VDOP to a stunning, unforgettable end.

After the genre-mangling brilliance of Cowboys From Hell made them a very big deal, Pantera needed to deliver a follow-up album that cemented their reputation as the metal band of the 90s. Mouth For War sealed the deal within a few seconds of its opening riff. It still sounds ridiculously exciting and thuggish today; that pinpoint syncopation between Dimebag’s riffs and Vinnie and Rex’s rhythm section pushing metal into new territory while sounding like a very real and present threat to the mainstream status quo.

Pantera may have been most celebrated for their 100% aggressive material, but they were capable of great soul and pathos too. This Love is a ballad of sorts, not to mention a brilliant showcase for Phil Anselmo’s singing voice (remember that?), and its precisely executed shifts from brooding restraint to thunderous, skull-crushing brutality proved that Pantera were masters of dynamics and bona fide heavy metal melodrama. Plus, it features one of Dimebag’s greatest ever solos and several of the most gloriously Neanderthal riffs ever to fall from the bearded icon’s mercurial brainpot.

Oh come on, it has to be this, surely? Fucking Hostile only lasts for 168 seconds, but it tells you everything about Pantera within that breathless onslaught. Essentially a thrash metal song, albeit one pumped up on sonic steroids and delivered with venomous zeal by a young band that gave no fucks whatsoever, it is one of the greatest moshpit anthems of all time, a goosebump-inducing statement of prowess and intent and an eruption of righteous fury that still makes most other metal songs sound a bit half-hearted. Metal could do with a bit more of this kind of thing, don’t you think?