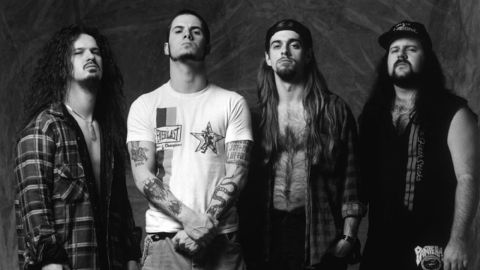 For a time, Pantera were the greatest metal band on the planet. Their ascendancy came at a point when the genre was faltering. Though 'The Black Album' had propelled Metallica into the mainstream, the ubiquity of the seattle 'grunge' sound had many of their peers running scared; Megadeth and Slayer already sounded like their own tribute acts. Maiden were struggling to adjust to post-Dickinson life and the emerging underground scenes in Florida and Gothenburg were conspiring to make the old Gods look toothless and impotent. While Sepultura, Biohazard and Fear Factory would all drive adrenaline spikes into metal's black heart, it was Pantera - and specifically their seventh album, 'Far Beyond Driven' - who created the true blueprint for the future.

Twenty years on from its March 1994 release, Far Beyond Driven remains a staggeringly abrasive listen. The most extreme album ever to top the US Billboard Chart, it is unrelenting in its ferocity, and utterly unrepentant in it’s savagery. From its cover art - a metal drill penetrating a human skull - to its songtitles (Slaughtered, Strength Beyond Strength, I’m Broken), … Driven is an album that telegraphs its intentions, but nothing can truly prepare the listener for what it is to come. Number one albums aren’t meant to contain lines such as ‘I fucked your girlfriend last night / while you snored and drooled I fucked your love’ , the horrifying opening coiplet from Good Friends and a Bottle of Pills. Rising metal bands with their eyes on the prize aren’t advised to pen songs as vicious, strident and ugly as Slaughtered. By comparison, the likes of Walk and Fucking Hostile sound cuddly.

“If we’d gone down a more commercial avenue, we’d have lost the respect of our fans” - Phil Anselmo

The work of a band unified like a clenched fist, Far beyond Driven is nonetheless Phil Anselmo’s finest hour. “A long time ago I never knew myself,” the singer acknowledges on Becoming, initiating an unforgiving therapy session during which ex-girlfriends, old pals and all fears are cast aside as Anselmo strives for the Nietzschean übermensch. On 5 Minutes Alone and Shedding Skin in particular, Anselmo is terrifying, Mike Tyson with a Shure mic, all muscle, machismo and menace. He’s abetted by stunning virtuoso performances from Dimebag Darrell: never as flashy as his hero Eddie Van Halen, here the guitarist’s meticulously deployed range of tones, textures, bite and crunch serves as a masterclass for any aspiring axeman.

The only disappointment here then comes in the half-arsed, lazy manner in which this landmark release has been repackaged. The two-disc set includes an incomplete document of the band’s 1994 Donnington set, omitting opener A New Level and nothing else: no demos, no rarities, nothing to entice anyone who owns the original album to shell out more. When one thinks of the attention and care lavished upon for example, Nirvana’s 20th anniversary edition of In Utero, such treatment is negligent verging on the disrespectful. Still, Far Beyond Driven hardly needs ribbons and bows: a high-water mark for 90s metal, it remains an essential part of any self respecting metalhead’s education.