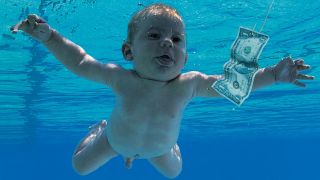 It all started with a quiet night in.

“I remember sitting in our apartment with Kurt one night,” former Nirvana drummer Dave Grohl explains. “I think Krist was there too. There was this special on TV about giving birth underwater.

“We went to meet the artwork people and said: ‘We saw this thing last night with all these babies underwater, and it seemed sorta cool.”

Robert Fisher was the sleeve designer charged with finding a suitable image for Nirvana’s second album. “I went out searching books and stuff,” he recalls, “and every picture I found was just way too graphic and gnarly to be used on a cover. But I did find a stock image of a baby swimming underwater that I cut out and proposed to the band. Kurt really liked that, so we went from there.”

Photographer Kirk Weddle, meanwhile, was responsible for organising the photoshoot. “My mom was good friends with this guy [Weddle],” says Spencer Elden, who had just been born in February, 1991. “He called up my mom and said: ‘We need someone to do this job.’ And I guess that was me. I was the baby that they needed. I am the Nirvana baby.”

With the basic image in the bag, the band and art team reconvened to discuss possible twists. “We started thinking of different ideas,” says Fisher, “and Kurt came up with the fish hook. Then we spent hours joking around with all the funny things you could put on the end of the hook. It ended up being a dollar bill.”

Nirvana’s label DGC label didn’t force any problems with the Nevermind cover. It was a satirical statement, but essentially an innocent one. Capitalism was the focal point – not the genitals of a new-born baby. That didn’t wash with the puritans of America, however, who upon the album’s release in 1991 flooded the airwaves with accusations of paedophilia. Several major US record chains refused to stock Nevermind and Cobain only agreed to the artwork being censored if the sticker read: ‘If you’re offended by this, you must be a closet paedophile’. The artwork remained untouched.

“Nobody paid any heed to the cover at our company,” recalls A&R man Gary Gersh. “But then the record blew up quickly and it was like: ‘Well, Wal-Mart won’t take this. ‘And we were like, ‘Who cares?’ We weren’t going to make a different cover. [It’s ludicrous that] you can take your driver’s licence and go into Wal-Mart and buy an AK47, but they wouldn’t take an album cover with a baby’s penis on it.”