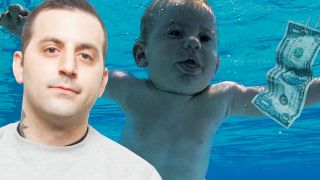 I had records that were my parents’ that I would listen to, but the first one I asked my parents to buy for me, that was just mine, was Nirvana’s Nevermind on cassette. I was 10, and I remember hearing Smells Like Teen Spirit, just like everybody else in the world, and I was just so excited. It was like nothing I’d ever heard. Up that point I was listening to my parents’ Beatles and Stevie Wonder records and I didn’t know much about popular music yet – this was the first new popular music I heard and it shook everything up for me. I saw the video on MTV and it was like nothing I’d ever seen. It wasn’t so much the action or the storyline in the video that drew you in – in the way that videos do now – it was more like ‘What are they wearing and why is everybody going so crazy?!’

I got the record after Smells Like Teen Spirit came out, which was the first single, so I hadn’t heard any of the other songs. Later on there was Lithium and Come As You Are, but that was all I knew when I first got it. I loved side A of the record, where all the singles are, but I pretty quickly started liking side B more and all the deeper cuts on the record. Even to this day I still prefer Side B. It’s one of the few records I still think of in terms of side A and side B, and I could tell you what songs are on which side. I always thought there were different vibes to the different sides, which I thought was really interesting – it was almost like you listened to the side that you were in the mood for.

Back then, when you got a new record you’d listen to it over and over and over again, and I was taking the bus and the subway to school just listening to it on my Walkman. I think the song that really stood out – even when it was new to me – was Drain You, because it was so melodic. It was more melodic than even the singles and it totally stood out to me as something different on the record. Now, listening habits have changed and you can listen to whatever you want wherever you are, but then you could only listen to what you could carry around with you, and with cassettes you’d just keep flipping it over and over. I still go back to it at least once a month and listen to it. It’s one of the best records of all time – that’s pretty undeniable.

Bayside’s album Vacancy is out now through Hopeless. Anthony was speaking to Mischa Pearlman.