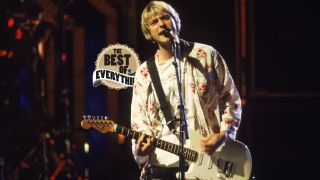 I first discovered Nirvana when I was 14 years old. It was the first time that I went into a record store with my dad and I was allowed to buy my own single, that wasn’t like a hand-me-down PJ & Duncan record.

The first cover that I was drawn to was this blurry photo of three people, and it was Nirvana’s Smells Like Teen Spirit. I hadn’t actually heard them before, but I thought it was the weirdest thing: how the band had purposefully blurred out their faces just seemed so weird to me.

I bought the record, and I took it home and listened to it, and my dad told me all about Nirvana. He’s full of rock ‘n’ roll trivia, and he told me everything about them, and how Kurt Cobain had committed suicide. I was drawn in immediately and, like anyone who hears Smells Like Teen Spirit for the first time, I freaked out.

Funnily enough, I actually got In Utero before I got Nevermind. I don’t know why. But that’s definitely affected my list: they’ve only got three actual albums, and the first one you hear is always the most special.

Everyone has a different opinion, and people are very precious about Nirvana. I’ve met so many people who think that Nevermind is their best album, and I argue with my friend all the time about which Nirvana album is the best, because he thinks Bleach is. That’s crazy though.

There’s way more songs that I could’ve picked, but I’ve just listed the ones that stand out for me above the rest…

SERVE THE SERVANTS (In Utero, 1993)
The first one is the opening song from In Utero, which is Serve the Servants. This song is just weird: it’s really surf rock, and that guitar line is really odd. The opening note actually reminds me of A Hard Day’s Night by The Beatles, and that might even be done on purpose: I know Kurt was a Beatles fanatic. So you’ve got this strange twang, and then it kicks in with that really surfy guitar line. I think it’s just a great song, and lyrically it’s incredible. And the fact that they followed up Nevermind – the biggest rock record of its time – with In Utero is insanity. It was so brave, and a real artistic statement.

**MILK IT **(In Utero, 1993)
This song’s on In Utero as well, and it’s disgusting. It’s really gross. I think he’s screaming, “Doll steak / Meat test” in the lyrics, which means absolutely nothing to me, and it probably meant nothing to him: it’s just chaos. But I like the idea of them being in a recording studio with Steve Albini [producer], and him just pressing record. And again, there’s real beauty amidst the chaos. I can’t fully explain the song, but it feels like a stream of consciousness kind of thing, and it sounds like they just went with the flow on this one.

**SOMETHING IN THE WAY **(Nevermind, 1991)
This is the last song on Nevermind, which we’ve covered a bunch. It’s a really bleak song, and it kind of feeds into the mythology of Kurt living under a bridge in Seattle: it’s about him living off the grass and the drippings off the ceiling of the bridge. It’s another really interesting song, and it’s really haunting too. Apparently Kurt recorded it lying down, and it’s in free time and a really weird tuning: it’s not in drop D. So Krist [Novoselic] had to spend ages trying to get the right tuning, and Dave had to speed up and slow down whilst playing the drums. It’s a gorgeous song: it’s dark, and eerie, and haunting.

SCENTLESS APPRENTICE (In Utero, 1993)
This is the second song on In Utero, and I believe Dave Grohl wrote the riff. I heard that he writes guitar riffs with the drums in mind, because he obviously has a drummer’s mind. So this song I think he wrote on the drums. The first time I heard it I thought it was crazy. It’s based on the book Perfume by Patrick Süskind, about the serial killer who goes around murdering people in search of the perfect scent. It’s super heavy, and noisy, and chaotic, but somehow they turn this horrible noisy song into something quite beautiful. Nirvana did that all the time.

**TERRITORIAL PISSINGS **(Nevermind, 1991)
This song makes me want to rage. It sounds like an angry kid freaking out and having a tantrum. I remember the first time I heard it: I felt the need to thrash around. I still feel like now, and I’m in my late 20s. It’s also one of those songs that I wish we’d written. Nirvana have a lot of those, but this one in particular is just so powerful, and the live footage of them playing it is unreal. The vocal performance is incredible, too. There’s actually a ‘Making of Nevermind’ documentary, and in that Butch Vig isolates his vocals at the end of this song. It sounds like he’s bleeding from the throat: his voice is completely shot, but he keeps screaming. They kept in those takes as well, which made me love the song even more.

ALL APOLOGIES (In Utero, 1993)
All Apologies is the last track on In Utero. I feel like if Nirvana would’ve ever done a fourth record, this is where they would’ve gone. It’s really Beatlesque with the cello. I think it’s gorgeous, and it showed a completely different side to them. To me, it also showcases just how brilliant a songwriter Kurt was. I think a lot of people take other things into account with him - from the way he looked to what he did on stage, and how enigmatic he was – but first and foremost he was just an incredible songwriter.

SCHOOL (Bleach, 1989)
I remember hearing this song when I was in school, and it really resonated with me. I think it would resonate with any young, confused daydreamer at that age. I don’t know how much I can go into the emotions with Bleach, but there’s some unreal riffs in there, and there’s a real energy to that record that you can only really capture on your first album: they sounded so youthful and exuberant. I don’t even know if you can hear that they were going to do Nevermind after it, because it’s a big jump in terms of song writing. The production is a little bit too metal based for me, and I prefer Dave Grohl as a drummer, but they sound like a great, noisy young band here, and when he goes into that half-time chorus and screams, ‘No recess”, I just love it.

WHERE DID YOU SLEEP LAST NIGHT? (MTV Unplugged in New York, 1994)
This was the last song of the Unplugged show in New York, and again there’s so much mystique around it. There’s that slight pause before the very end, where he looks up with that thousand-yard stare. So many people have analysed that moment: it’s like he’s had a bizarre, eerie realisation about something. Maybe it was just for show, but he hadn’t really done anything like that before. It’s a great song anyway, by Leadbelly originally, but what they did with it was really powerful, and Kurt really meant it. There’ll never be another one like him.

**NEGATIVE CREEP **(Bleach, 1989)
This song is so gnarly, and his vocals on it are so good: that tight, throat-ripping screaming makes him sound so angry. It’s a dark, twisted alternative rock song, and the energy in it just makes me want to play air guitar and jump around my room. I used to have the tennis racket when I was a kid, and this song still makes me want to do that with my guitar today. That’s the power of Nirvana: they’re the band that made me want to play the guitar.

Murray Macleod was talking to Matt Stocks. The Xcerts’ new EP Live Like This is out now. For more information, visit their official site.