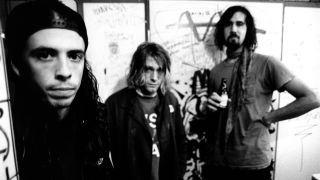 “I want to sound heavy.”

This was the sole instruction Kurt Cobain issued to producer Butch Vig on May 2, 1991, the day the producer sat down behind the Neve soundboard at Sound City Studios in Van Nuys, California to start the tape rolling for the recording of Nirvana’s second album, Nevermind.

Vig had first met Cobain exactly 13 months earlier, when Nirvana arrived at his studio in Madison, Wisconsin to cut some demos for the follow-up to their Sup Pop records debut album Bleach.

The young producer had already carved out a formidable reputation among the US underground music community thanks to his work on albums by Killdozer, Die Kreuzen and Urge Overkill, and his first impressions of the band who tumbled out of their Econoline van outside Smart studios on the morning of April 2, 1990 weren’t entirely positive. Nirvana, he remembers, were “three scraggly-looking, greasy, dirty kids”, and their frontman gave every impression of wanting to be somewhere else.

“He came in and said ‘Hey, my name’s Kurt’, loaded in his amp and his guitar and then just sat in the corner and didn’t say anything for about half an hour,” Vig recalled. “I thought something was wrong, either he didn’t want to be there, or maybe he didn’t like me from the second he saw me. But finally Chris [Novoselic] pulled me aside and said ‘It’s okay, Kurt gets that way, he gets in these funks but he always snaps out of it.’ And sure enough, he slowly came out of his shell.”

That afternoon, Nirvana played seven new songs for their new producer: In Bloom, Dive, Lithium, Breed (then known as Immodium), Stay Away(originally titled Pay To Play), Sappy and a haunting acoustic track called Polly, based upon the true story of a 14-year-old girl who’d been abducted, raped and tortured following a punk rock show in Tacoma, Washington in 1987. Vig was blown away by what he was hearing.

“I realised ‘God, there’s some great, great, great songs’ and I was excited,” he recalled. “Once they started playing they were a powerful sounding band. I’d heard Bleach, and to be honest, I was not that impressed.

Most of the record was very one-dimensional, but the one song that stood out to me was About A Girl: that song showed someone capable of writing a brilliant pop song. Looking back now, that was sort of the shape of what was to come.”

It was a full year until Vig heard from Nirvana again, asking if he would produce their next album, which was due to emerge on their new label Geffen records. In truth, it was less a request than a demand, for the label had already booked Sound City and work was to begin on the record in five days.

The producer requested that the band book a rehearsal room in Los Angeles so that he could hear their new material and iron out the arrangements before setting up at Sound City. The first track that the band, now featuring new drummer Dave Grohl, played for him was a new song called Smells Like Teen Spirit.

“I remember pacing around the room going ‘Holy shit, this sounds so fucking good’, Vig recalls. “I said ‘Wow, that sounded great, can you play it again?’ Dave didn’t have any mics on his kit, and Kurt and Chris had their amps at stun volume, but it just still sounded perfect. I called their manager and said ‘I think we only need like two or three days of rehearsal, I don’t want to burn them out’. It was one of those things where you get out of the way, don’t over-think it, go in and record now.”

For the most part, the sessions at Sound City went smoothly. Butch Vig would clock in at the studio around lunchtime each day, the band would arrive around three in the afternoon, record the basic tracks for two or three songs, and exit the around 11pm. Two and a half weeks on, they had a record.

“It was really fun,” said Vig. “There was no pressure.”

The band’s A&R man Mark Kates checked out the fruit of his new band’s labours while Vig was putting together initial mixes of the record at Scream studios in Los Angeles.

“It sounded like a really great, powerful, complete record,” he recalled. “We felt they had accomplished the absolute maximum of what could have been expected from them.”

Geffen pressed up 46,251 copies of the album and hoped for the best.

Nevermind was released on September 24, 1991. Two weeks later, it debuted at Number 144 on the Billboard chart. The next week it climbed to 109: the following week it hit number 65 as its lead-off-single Smells Like Teen Spirit went into rotation on MTV.

“I thought …Teen Spirit was just another album cut, but the video made a big difference,” Dave Grohl recalled. “We were still in our little bubble… and it didn’t seem like anything unusual was happening until you’d get to the gig and it was chaos. And we started to notice there were normal people and jocks at the shows and it was like ‘Oh, maybe that video thing is attracting some… riff-raff’.”

When Nirvana returned home for a headlining show at Seattle’s Paramount theatre on October 31, 1991, Nevermind had passed the 500,000 sales mark. As their US tour ended on January 2, 1992 sales were soaring past two million.

On January 11, the album knocked Michael Jackson’s Dangerous from the top of the Billboard album chart. Those “scraggly-looking, greasy, dirty kids” were now America’s favourite, and most bewildered, pop stars.