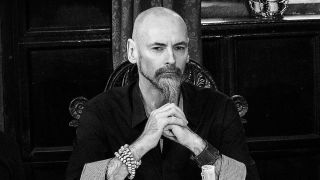 Unless you live under a rock (and have no internet connection... wait. How are you reading this?!), you will be well aware of the affect covid-19 or coronavirus is having on the world. Many countries have been advised to self-isolate, with numerous businesses and, even more tragically, gigs and festivals being cancelled – at least for the next month.

But what are we supposed to do with no socialisation, no beers, no sweaty mosh pits, trapped within the four walls of our own hea- I mean, homes?

Well before the world devolves into an electricity-free post-apocalyptic war zone*, we thought we'd make sure you are well prepared with a stack of brilliant, inspirational, old-school paper books that require only a literate mind and perhaps some candlelight to devour – all recommended by My Dying Bride’s Aaron Stainthorpe.

In no particular order, but saving the best 'til last, here are 10 books that'll help you wait out this inevitable armageddon*.

*Sensationalist language used for comedic effect, please do not use this as an excuse to stock pile bog roll or clear the shelves of Asda's soap and sanitiser aisles.

So, the opening gambit is going to be Guards! Guards! by Terry Pratchett, which is not one that many people will expect because it’s amusing, and its comedy. I think a lot of people have a perception that I only read particularly glum pieces of literature.

I like glum literature, but I like the lightness that Terry used to bring to his writing and some of the characters in the Discworld series, y’know I love them. I’ve read all of the Discworld books and this one is my favourite. Great characters, well written, laugh out loud moments.

The Sparrow by Mary Doria Russell

Then I have The Sparrow’ by Mary Doria Russell, which is a science fiction / theology novel that questions God – it’s about how the church detect a sound coming from space which they think is music, and so they research it and it appears there is life up there rather than just on Earth and it makes them all wonder “Is God real?”.

But it’s quite a technical book but it’s a great read, it’s very very well written and there’s some quite interesting and gory parts to it. Very, very interesting.

The Prophet by Kahlil Gibran

The Prophet by Kahlil Gibran is next. I think most people have probably read this at some point, and it’s probably not a great surprise that it’s on the list. It’s not a big book, and unfortunately, it’s not the illustrated version. I’ve not seen that one yet. It’s a very slim piece of literature and its… well just read it. You’ll understand it when you read it - it’s an interesting piece, very well written, and it kind of put’s people in their place. And rightly so!

The next one is Content Provider by Stewart Lee – who is my favourite comedian. While it’s not a novel it’s still a book, and you asked what my top 10 books were! It’s full of the nutty stuff that he’s written for various newspapers - a lot of it is surreal and a bit weird. He’s such a great craftsman of amazing satirical jokes.

The whole book is filled with his mad ramblings and he sometimes goes off on a tangent yet manages to come back and make it all okay again. He’s a hilarious comedian and I highly recommend people go and see him.

Sebastian is one of Laurence Durrell’s novels, and Laurence is the brother of Gerald Durrell most known for his book My Family and Other Animals - but Laurence was the serious writer and Sebastian is a lovely book.

Again, it’s really well written; not the easiest book in the world to read but I think it’s worth reading. It’s quite a deep book from time to time. It’s part of a series and it’s a bit old school, but its lovely. Have a go on it, see what you think.

The Favourite Game by Leonard Cohen

The next book in my list is The Favourite Game by Leonard Cohen and if I’m honest, it’s not the greatest book I’ve ever read, but it’s just written with a certain angst and there’s a certain attitude going on there.

It’s sort of about growing up and the trials and tribulations of youth and growing into an adult. It’s got those sorts of familiar, painful growing moments we’ve all been through but dealt with in Leonard’s poetical style. It’s nothing like his poetry, but I think it’s a great read anyway.

The Language of Thorns: Midnight Tales and Dangerous Magic by Leigh Bardugo

Next up is The Language of Thorns by Leigh Bardugo. I managed to get a beautifully illustrated version of this book. It’s a collection of fables I suppose, or fairy tales if you like. It’s really well written; some of them sort of link to familiar fairy tales we’ve all learnt as we grow up.

There’s a little bit of a twist on some of those classics and as I say, it’s very well illustrated and a lovely book.  Because it’s a collection of short stories it’s easy to sort of dip in and out of. You don’t need to sit there and read the whole thing in one go.

In fact, it’s probably better not to, because then you’ll end up getting all the different fables all mixed up and the character in the first story… you’ll probably end up getting confused with them being in the fourth.

The Consumer by Michael Gira

The next book is The Consumer by Michael Gira, vocalist of Swans and various other projects. Again, this is a collection of different short stories from Michael and I really like his writing. It’s a bit bizarre and it’s a bit abstract, but he’s got a good penmanship.

When you’re reading some of his stuff you just scratch your head a bit and think “Is he on something when he’s writing this?” because it’s a bit bonkers but I kind of like where he’s going. He goes places you wish he hadn’t gone and you wonder “should we flick through this a bit quicker?” but no, you’ve started reading it and you continue to read it.

It’s a bit of an old book now I guess but it’s an awkward, slightly disturbing read in places. If you’ve read it you know exactly what I mean. That’s Michael Gira in a nutshell, I suppose.

And the Ass Saw the Angel by Nick Cave

The next one is And the Ass Saw the Angel by Nick Cave, and this in fact directly inspired one of our songs The Raven and The Rose. I just like the way Nick wrote; he doesn’t write like I sort of thought he would. Because of the way his songs work, you might think he’d write in a more gothic style and he certainly doesn’t.

He has more of a sort of American twang, I suppose. Again, it’s an interesting, slightly disturbing story and it influenced me enough to create a song based on it. So worth a read. I’ve read one of his other books, I can’t remember what it’s called, but that was equally as good.

Lord Of The Flies by William Golding

We’re on to the last two! Out of the whole list, Lord Of The Flies by William Golding is probably the one you’d call a classic. Y’know, I had to do it in school but I’m glad we did it at school because it’s an amazing read. It was Golding’s debut book and what a way to start your writing career!

Obviously being made into umpteen different films and all sorts of plays and things. It’s a lovely, lovely piece. I think it’s one of those books you should get your kids to read or even if you don’t have kids, you should read it because it shows you just how destructive we can become when put into a certain situation. Admittedly a highly stressful situation but nevertheless worth a read, I think it’s a very important book.

My top book, and I’m still reading it - so putting it at the top of the list when I haven’t even finished it yet is potentially a very risky - because if it ends disastrously it probably won’t be my favourite book! But it’s Gormenghast by Mervyn Peake. Now I didn’t bother buying all three individual books, because it’s a trilogy, I bought them all in one massive volume which is as thick as the walls on my house.

It’s so exquisitely beautifully written that every page is so descriptively lush that I wish I’d written everything, and I almost want to write songs in the same style that Mervyn Peake wrote Gormenghast.

It seems to be tailing off a little bit on the final book because unfortunately Mervyn Peake was getting more and more sick as he grew older, and he never completed the last bit, but through his notes and people who knew him, another author who was very friendly with Mervyn managed to finish the book.

Certainly, the first two are tremendously well written, the wording is just right up my alley and I just wish I could pen My Dying Bride lyrics half as good as Mervyn Peak’s Gormenghast. It’s an amazing book and I love it. I just hope it end’s great!

My Dying Bride’s new album The Ghost Of Orion is out now via Nuclear Blast, available to purchase here.