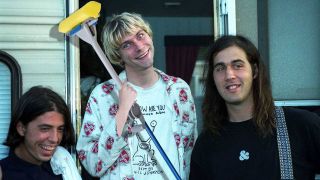 Some people were simply born to be rockstars – it’s hard to imagine Freddie Mercury doing anything else. But on that long path to greatness, even the biggest soon-to-be megastars had to earn a buck or two along the way. After all, sequined cat suits aren’t cheap.

You can imagine the conversation: “I’m going to be a globe-conquering rock star one day.”

“Well, that’s great, Elton. But you’re not one yet, mate, so in the meantime, those pans aren’t going to scrub themselves. What’s more, we’ve been getting complaints of glitter in the soup again. And please wear appropriate footwear tomorrow.”

We all have to start somewhere, and this article tracks ten surprisingly normal jobs that burgeoning icons-in-waiting took in their quest for success.

Of course, our top ten is just a tiny selection of the many slightly less glamorous positions today’s rock legends have had to endure. Duff McKagan the pastry chef is an intriguing prospect; as is Slash the champion BMX rider – while not exactly a dull job, guitar god still has a slightly better ring to it.

Tom Morello, who boasts a prominent lineage in Kenyan political figures including his diplomat father, briefly worked for a Senator – only to get in trouble for calling one of his constituents a ‘damn racist’. He also worked as a stripper. Debbie Harry worked as a secretary, waitress and a Playboy Bunny before finding fame with Blondie, while Shirley Manson served in the cafeteria of the local hospital. Hiphop mogul Puff Daddy cleaned the cars of record executives before taking their jobs.

So remember to be nice to the person who serves you coffee. They might well be the next Karen O or Axl Rose.

The Smells Like Teen Spirit video was an instant classic that announced Nirvana’s arrival in the big league. The intensity of Kurt Cobain’s gaze as he stares down the camera lens is enough to burn a hole in your very soul. Equally pertinent is the video’s slightly sinister portrayal of a school janitor, complete with overcoat and mop. It’s a role that Kurt knew well from his days mopping the floors of Weatherwax High School.

But he wasn’t the only axeman of the early 90s US alternative scene to start out as a janitor before the stage beckoned him to stardom. It’s an accolade Cobain shared with Noodles, from Californian punks The Offspring, who was often seen changing the classrooms’ bulbs and unclogging the gutters of Earl Warren Elementary School, Garden Grove.

Today, LA’s resident growler Mark Lanegan fills the shelves of record stores through being an incredibly prolific artist with umpteen solo records to his name, eight studio albums with Screaming Trees, and various collaborations with Queens Of The Stone Age and Isobel Campbell, amongst others. But once upon a time, he literally filled the shelves – in the warehouse of a chain of record stores.

He also spent time as a washing machine repossession man, visiting people’s homes and removing the white goods of those who hadn’t made their payments. But for much of his formative years, his destiny appeared to be that of a humble farmhand, driving combine harvesters out in the fields. Then one day, he was run over by a tractor in a freak accident that put him out of action and left him bed bound.

This tragedy kickstarted a series of events, including being dumped by his girlfriend and his motorcycle being written off by his mate, which ultimately culminated in him joining Screaming Trees. The rest, as they say, is history.

The long-haired, bearded Australian polymath, Kevin Parker (AKA Tame Impala) has done as much as anyone to popularise psychedelia for the contemporary generation. His heady concoction of effects-laden guitars, reverb-swamped vocals and throbbing synths essentially amounts to one long, blissed-out trip. But the trips he used to take were slightly more mundane – back and forth delivering court documents as a law clerk in Perth.

As far as sets of imagery go, his sun-dappled beach bum look couldn’t be further from the boy in an ill-fitting suit, shuffling paper. At least the monotony gave him cause for escapism. To relieve the boredom, Parker created melodies and song ideas in his head as he went about his work. Fittingly, he called his acclaimed debut Innerspeaker.

If history had taken a different path, the imperial mid-70s Fleetwood Mac incarnation might never have happened, with the band fading into obscurity following Peter Green’s departure. Christine McVie and Stevie Nicks both originally trained to become teachers.

But with the temptation of the stage proving too much to resist, they took whatever jobs they could to get a foot in the door. For McVie, this meant dressing windows in a department store, while Nicks worked briefly as a waitress and also as a cleaner for Grammy-winning producer, Keith Olsen. He returned the favour by securing her a record deal, hooking her and Lindsey Buckingham up with Fleetwood Mac, then going on to produce their phenomenally successful 1975 self-titled album. Sorting smelly socks paid off in the end.

Jack White knows a thing or two about tufting ties and locked blind stitching. And he certainly knows his bergere from his chaise-long. That’s because in his formative years the former altar boy – who almost joined a seminary to become a priest – made a living re-stuffing old sofas. In fact, he even created a band with his co-worker, The Upholsterers, who released an album, Makers Of High Grade Suites. White would go on to set up his own shop, Third Man Upholstery, and to amuse himself, the young musician would occasionally hide handwritten poetry or one of his records deep in the stuffing of an armchair.

So, if you happened to be living in the Detroit area in the early 90s and had your wing-back or slipper re-plumped by a rather anaemic looking gentleman, you might now be in possession of an extremely rare and highly valuable 7”. It brings new meaning to the phrase sitting on a fortune.

25 years ago, Oasis released one of the most compelling and fully-realised debut albums of all time – a juggernaut that defined a generation of Brits and compelled them to pick up guitars. Definitely Maybe remains one of the UK’s fastest selling debuts and frequently pops up on ‘best of’ lists.

So how did Noel sustain himself while writing his masterpiece? Largely by working on construction sites. When he injured his foot on site, he was reassigned to the storeroom, or the ‘Hit Hut’ as he would later call it, where he penned future classics including Live Forever and Columbia.

The nu metal giant is personally responsible for the sale of millions of oversized black hoodies and probably quite a lot of black nail varnish, too. But before becoming a poster boy for a generation of disenfranchised teens, Korn frontman Davis studied at the San Francisco School of Mortuary Science and spent time working, rather fittingly, at a morgue.

Perhaps dull isn’t the right word, but it’s certainly a little bit morbid, particularly when compared to another of his early jobs, working for Toys R Us.

When the young Gordon Sumner told his mum he was going to join The Police, she presumably thought this new venture was simply the latest in a string of respectable careers. After all, the bastion of society had previously demonstrated great flair working as a milkman’s assistant and then a bus conductor.

But his most thrilling pre-fame job – the very epitome of living life to excess – was a tax man. No points for guessing his favourite Beatles track. In 1978, Sting sang ‘I don’t wanna be no tax exile’ in the appropriately-titled Dead End Job – a line he would probably regret a couple of years later, when he moved to Ireland to become exactly that.

Incidentally, Sting was one of many rockstars to try their hand at teaching before hitting the big time. Mark Knopfler of Dire Straits also spent three years as a lecturer at Loughton College. That’s after first trying his hand as a journalist (what a dull job!), working as a junior reporter for the Yorkshire Evening Post. This was before realising that all he need to do was get on MTV with his old pal Sting and make money for nothing.

Following in the footsteps of her laser physicist father, Pixies legend Kim Deal first earned her living donning a lab coat rather than a bass guitar. Graduating in medical technology, she worked in various laboratory jobs in the fields of cellular biology and biochemistry. Presumably she had much to talk about with drummer and fellow science grad, David Lovering, who spent some of his pre-Pixies years building lasers.

Incidentally, when the Pixies split acrimoniously and Deal found success with The Breeders, Lovering turned down a job behind the kit of the Foo Fighters to get back into a lab coat to perform his physics-based magic show: the Scientific Phenomenalist.

Nothing, absolutely nothing, says rock and roll like data entry. It requires stoicism, patience, precision, a cool head – basically every quality you could hope for in a rockstar. Perhaps that’s what made the young, angry Declan MacManus the perfect candidate for the role. He showed great aptitude entering data for cosmetics giant Elizabeth Arden, and it supposedly even inspired the song I’m Not Angry and its references to the ‘vanity factory’. So overjoyed was he by the experience that he then moved on to working on a computer for the Midland Bank.

Unfortunately, he had to go and ruin it all by becoming a rockstar – a devastating loss to the data entry world.