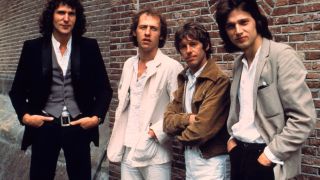 For too long, Dire Straits have been saddled with a reputation as the pinnacle of naff 80s rock. As these ten classic songs prove, that couldn’t be further from the truth.

Conceived as a be-bop jazz number but slowed to a stately bossa nova at the suggestion of manager Ed Bicknell, this Brothers In Arms track stirs up the humid, smoky atmosphere of a Latino cantina at midnight.

The opening track on the band’s self-titled 1977 debut album laid their cards on the table: the four Aces of Mark Knopfler’s ringing guitar and nicotine-laced vocals, his cinematic lyrics and the rhythm section’s effortless shuffle.

Written by Knopfler as the theme tune to the film Local Hero and featured on Alchemy, this gorgeous instrumental brought each night of the Love Over Gold tour to a rousing end.

On the highlight of their second album, 1979’s Communique, Knopfler’s guitar sings through the heat haze of a laconic groove that rolls on and on. Recorded in the Bahamas and sounding like it.

On the opener of 1982’s startling Love Over Gold the band cruise down the highway for 15 minutes with the terrain ebbing and flowing through a series of first bittersweet and then surging movements.

The hushed title track of Dire Straits’ biggest-selling album has a dignified but lasting power, with a stunning guitar solo ushering it into the ether.

Spine-tingling from the moment Knopfler’s picked intro is kissed by E Street Band keyboard player Roy Bittan’s piano, and then crashing into a heart-tugging chorus. A classic.

Conjuring up a musical backdrop that erupts into an explosive guitar assault, Knopfler uses the private gumshoe as metaphor for the solitary songwriter. It was an unlikely hit single in 1982, more than 30 years on it still sounds extraordinary.

The live double Alchemy from 1984 captured Dire Straits at the peak of their on-stage powers. Witness this thunderous take on their breakthrough hit, taken here at twice the speed and extended to near-breaking point.

Sultans Of Swing: The Untold Story Of Dire Straits