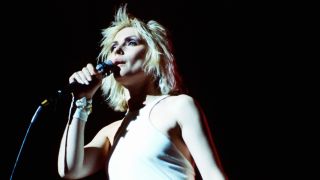 With its seductive snarl and hooky riff, One Way Or Another provided a bridge between Blondie’s grimy, CBGB past and glossy commercial future. It is in many ways the quintessential moment from the ultimate new wave album, 1978’s Parallel Lines, which yielded six singles in the US and UK and sold more than 20 million copies worldwide.

Those statistics would have been inconceivable just two years earlier. Blondie were the least likely candidates for global fame to emerge out of New York’s seedy punk milieu. Ramones, Television and Talking Heads were all marked out for critical, if not commercial, success. Blondie, by contrast, were regarded as a joke, with their attempts to bring girl group sass to garage rock.

And then in 1977 their single Rip Her To Shreds, from their self-titled debut album, became a Top 5 hit in Australia. Suddenly it didn’t seem ludicrous at all that this platinum-blonde sexpot backed by four identikit, dark-haired male musicians should become a mainstream staple. And by 1978 that’s exactly what happened: Denis, (I’m Always Touched By Your) Presence Dear and Picture This reached numbers 2, 10 and 12 respectively in the UK chart.

But the group still hadn’t cracked the US market. Enter Mike Chapman, the bubble-glam producer for The Sweet, Suzi Quatro and Mud, among others, who was brought in to finish the job that Richard Gottehrer, producer of Blondie’s previous album, Plastic Letters, had started: to make them worldwide stars.

“I don’t know if it was that deliberate,” the band’s guitarist and main songwriter, Chris Stein, considers, “but certainly Mike Chapman had been involved in a lot of number one records.” Stein agrees that Chapman gave Blondie an essential polish, notably on One Way Or Another: “It definitely connects punk and pop, especially in the vocals and the raw guitars. It’s got the snarl of punk and the glossiness of pop.”

One Way Or Another was recorded between June and July 1978 at the Record Plant studio in New York. It packed a lot into its three-and-a-half minutes: a snappy guitar riff, keyboards, bass and drums that achieved the perfect blend of tunefulness and menace, some swirling organ, a police siren sound, and a coda that nodded to the band’s 60s garage roots.

“He was so wild, I had to move out of New Jersey,” she has said of her ex-boyfriend who worked all day in a chemical plant and drank all night, at which point he would “start after me”, calling her on the hour, every hour, and then hanging around outside her door.

“The girl in that song is certainly not a victim,” says Stein. “The protagonist is a self-empowered figure.”

The lyrics to One Way Or Another were written by Harry, while the co-writing credit went to the British born Nigel Harrison, who had joined the band as bassist after Plastic Letters. The basic musical structure was Harrison’s but the details and flourishes could have come from any of the musicians in the band. “Everybody played their part, and the songs were shaped in the studio,” says Stein.

Those studio sessions were fraught. Chapman, an Australian living in LA, found his first meeting with Blondie, at the Gramercy Park Hotel, decidedly “unnerving”, perhaps because they sensed that he had been brought in to clean up their act – or rather hone it until they became a well-oiled chart machine. “They were all over the place, musically,” he said. “The group didn’t know what hit them.”

Chapman’s memory is of the “dark, silent and serious” Harry. As for the others, there was no little antagonism when they realised how hard he was going to work them to turn their demos – “embryos of a musical masterpiece”, as the producer put it – into finished works of pop art.

“He [Chapman] was a hard taskmaster,” Stein says with a laugh. “He would go over and over a part until we got the right version. That’s something we hadn’t been familiar with prior to working with him. By the time we got to [1979’s] Eat To The Beat it was much more loose. That was like ‘school’s out’ compared to Parallel Lines.”

Stein got off lightly – during one session Chapman claims to have “rode [Harrison] so hard he threatened to take me apart piece by piece if I didn’t back off. No one,” he adds, “was happy with my technique.”

It worked, though. One Way Or Another, although never released as a single in the UK, became such a favourite with audiences it felt as though it had been. In the US it reached No.24. It presented a new type of female performer: the arch glamour puss, every bit as tough as Poly Styrene or Siouxsie Sioux, but with added boho, SoHo chic, as though Patti Smith had been remade/remodelled by Warhol. Surprisingly, for all its qualities, Stein didn’t think One Way Or Another would make a good single, let alone a hit. “You’re never 100 per cent sure,” he says.

With a little help from One Way Or Another and its parent album, Blondie became one of the biggest bands of the era. They also invented a new paradigm: catchy, danceable new wave, the sort that has been unavoidable these past few years. Asked whether he’s amazed at their achievement, Stein’s wry reply is as pure New York cool as the song itself. “Somewhat,” he says, “yeah.”

For more on Blondie and the ever enigmatic Debbie Harry, then click on the link below.