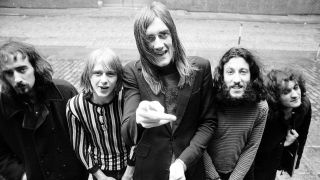 There are two distinct Fleetwood Mac eras. One is the hugely successful, ongoing Buckingham/Nicks mainstream version. Before that, though, there was the first line-up, namely Peter Green’s Fleetwood Mac. This lasted from 1967-70, a period when the band were regarded as pre-eminent blues rockers. And they recorded some indelible tracks. Here are the best.

A hit single for the Mac, getting to No.31 in the UK chart, this cover of the Little Willie John song is calm and stylish, and provides an early showcase not only of Peter Green’s guitar brilliance, but also of the depth in his vocal abilities.

Written by bassist John McVie, the track might begin as a seemingly straightforward blues song, but it quickly takes a turn into a more psychedelic routine. Not only do Peter Green and Danny Kirwan play some momentous guitar parts, but Mick Fleerwood’s drumming throughout is propulsive. It’s a quite remarkable and near freeform instrumental.

A jaunty romp through the Elmore James song, with Jeremy Spencer doing a fine job on the vocals. The band glide through this with a good deal of energy, yet while they never lose respect for the compositional structure, nonetheless the four also add in their own sense of character and dynamic.

Yes, to most people this is most recognisable as a Santana song, because they had the biggest hit with it. But the Fleetwood Mac original has all the trademarks which make Black Magic Woman a classic. The chiming, near Latin shuffle offsets the typically composed blues fire. The combination is inspired.

An instrumental single that topped the UK charts, this is a brilliant example of the way in which Green and Kirwan complemented one another. Majestic, haunting, it actually inspired The Beatles’ Sun King, and retains its power to move you. One of the truly great rock instrumentals, the impact is peerless.

One of the most abject and haunting songs of the Peter Green era, this is a tale of craving. It’s about someone who believes he has everything, except what he most wants: a companion. Green delivers the vocals with a slow burning sense of emptiness, which is highlighted by the band’s low key, sympathetic gentility.

This is two songs in one. The first part is a high speed blues workout featuring vocals, while the second is a more classically inspired instrumental glide. The opening section is heavy enough to be proto metal, and has some flashing riffage from Green and Kirwan. The latter one is more moody. The combination, though, is inspired.

This is among the last songs Green wrote before quitting the band. An insistent riff carries the rhythm, while Green wails the near impenetrable lyrics. At the time, he was taking a lot of acid, but has always maintained this was about the evils of money. Later covered by Judas Priest, it’s an unforgettable bridge between blues, psychedelia and metal.