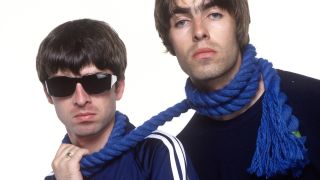 The 20th-anniversary edition of the debut album from Oasis, Definitely Maybe, is released today. So, what’s the story?

No, that came later. This is a 3CD reissue of Definitely Maybe, which, along with Blur’s Parklife, is regarded as having heralded the rise of Britpop.

Britpop? I’ve hardly heard that mentioned in the media recently. How did Oasis fit in with that?

Well, you could say Britpop was the upshot of a very English laddish self-confidence that was suddenly in the air after the low ebb of early 90s recession and its despondent, self-effacing, soundtrack of shoegazing, miserabilist rock. Oasis, like Loaded magazine, reflected a new swagger and ambition. The enormous success of Stone Roses hinted at a collective hunger for a Beatles-shaped British band we could all agree were the biggest thing in the world. The Roses shrunk from the task, not following up their debut for seven years but Oasis showed that despite the combustible relationship of Noel and Liam Gallagher, they were sorted enough and up for the task.

Not with Definitely Maybe, which is definitely, not maybe, their best album by a long stretch. From Rock’n’Roll Star to Cigarettes And Alcohol, it’s a relentless, epic, insolent, shameless, cocky reaffirmation of white, male, British guitar music. At the time, it felt as bracing and toxic as swinging open the doors of a Friday night boozer and being knocked back by the tobacco and beer-soaked atmosphere and raucous noise. Still does. It’s like The Beatles, Stones, Who, Slade, Pistols, Jesus & Mary Chain and The New Seekers all rolling over you at once. Resistance is futile, qualms also. The album was an instant bestseller and Oasis never looked back, certainly not in anger - they only looked at each other that way from then on.

Wait, wait, could we just roll back with a second? The New Seekers?

Er, yes, Shakermaker certainly bears a strong, passing melodic resemblance to The New Seekers’ I’d Like To Teach The World To Sing. Noel Gallagher’s tendency to pay, er, “homage” to pop’s past meant that on their follow-up album, the more lethargic (What’s The Story) Morning Glory, one track, Step Out, had to be pulled on account of its strong musical resemblance to Stevie Wonder’s “Uptight” and the threat of legal action.

Yes, and therein lay Oasis’s problem. On the plus side, they inspired and galvanised a new wave of British guitar bands. On the other hand, most of those bands weren’t any good. Eventually, Britpop’s musical outlook turned grey and cloudy, backward-looking, conservative and uninspired. Oasis looked to repeat the success of The Beatles but ultimately lacked their creative, Sergeant Peppery, forward-looking spirit.

Still, we’ll always have Definitely Maybe. I suppose it comes with usual bells, bits and bobs and extras attached?

Two discs of them - b-sides, rarities, demo versions, live outtakes, including a version of Live Forever recorded in a Paris record store, a strings-only version of Whatever and affecting acoustic numbers including Half A World Away, later best known as the theme tune to The Royle Family.