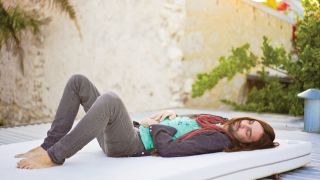 Australian prog-psych critical darlings Tame Impala have just made an album of phantasmagoric funkadelia. Which is all well and good, but where the hell do we locate it in what remain of the globe’s vinyl and CD emporia? “I haven’t been to one recently,” drawls Kevin Parker, who on record is Tame Impala, handling all of the writing, production and performing duties himself. “I figure it’s still in the new releases.”

Okay, what section would he be least offended to find it in? Space-age disco? “Um,” he pauses for a moment of reflection, ahead of a gig by the five-piece live version of Tame in Glasgow, one that will be hailed by a national newspaper for its “mood-altering effects and sonic showmanship”. “How about easy listening?” he wonders aloud. “Or adult contemporary?”

He jests, of course. But it is getting harder to categorise Tame Impala. Their 2010 debut album of freak rock, Innerspeaker, with the Pink Floyd circa Ummagumma-echoing sleeve, grabbed the attention of stoners everywhere, while follow-up Lonerism saw Parker proclaimed as rock’s new wizard with an album as cosmic as it was melodic.

I write pop songs sometimes as a release from writing other, more complex songs.

Third album Currents amps up the synths and funk: think Yes produced by Barry White. Some Tame fans – and diehard prog/psych-heads – are concerned about this shift in direction. Just wait till they hear that Parker has amassed a batch of songs for Kylie Minogue. Are the rumours true about him and the pop princess?

“Yes and no,” he vacillates. “I write pop songs sometimes as a release from writing other, more complex songs. Anyway, I was saying that to someone in an interview and he asked who I wrote these songs for, and I said, ‘I don’t know – Kylie Minogue,’ or something. When the article came out, that was the headline: ‘Kevin Parker Has Written An Album For Kylie Minogue!’ But I hadn’t.”

There must be something in the air. Has he heard Miley Cyrus & Her Dead Petz, the team-up between Billy Ray’s wayward daughter and Wayne Coyne?

“Yeah, I listened to it the other day,” he says. “I thought it was cool; pretty different. Put it this way: it’s exactly what I’d expect from those two. It’s weird, in a good way. I like it when people from opposite extremes of the musical spectrum get together. That’s when the most interesting things happen.”

Does he believe the idea of the dramatic changes between Tame albums has been overplayed?

“I guess so,” he replies. “Right now, this is my favourite kind of music. In some ways I’m getting closer to the ultimate music I’d want to listen to.”

One thing unlikely to happen at any time in the future is Parker delegating in the studio: the vocals, guitar, bass, keyboards, synths and drums that you hear on his records? That’s all him. He describes himself as “a Jack of all trades and master of none”.

“I’m probably the best at drums but I’m not even that good,” he admits. “If I was to have a jam behind a bunch of people, I’d go for the drums because that’s the instrument I can play without thinking. And guitar and bass I’m pretty good at; keyboards I’m pretty average but I can just about feel my way around.”

Of all rock’s feted do-it-all wunderkinds – Paul McCartney, Emitt Rhodes, Todd Rundgren, Jeff Lynne, Prince, Stevie Wonder – who does he most respect? (The Rundgren connection was made circa Lonerism, when Parker cited Rundgren’s album A Wizard, A True Star as one of his prime influences; later, Rundgren would remix a Lonerism track, Elephant.)

“Well,” he says, “Stevie Wonder would be up there, and not just because he’s blind but because I never had any idea it was all him, especially the drums. There’s also a Swedish artist who goes by the name of Dungen [aka multi-instrumentalist Gustav Ejstes] – I’ve always looked up to him.

“I always make music by myself but I didn’t think what I was doing was right,” he adds. “So I pretended it was a band. I thought if people knew what I was doing – overdubbing and multitracking all the parts – they’d think it was selfish. It was only when I discovered that people like Stevie Wonder and Dungen did everything, I realised it could be an art form in its own right. It was just another way to be expressive.”

Playing live is different, though, and Parker isn’t tempted to appear onstage solo. “No,” he sighs. “For me, being onstage is far too much of a communal thing. Even if they’re songs I’ve written myself, it still feels like a normal band when we’re onstage. Playing live is all about connecting musically. It’s a relationship.”

I hate the idea that I rely on alcohol or weed to be creative. That would be depressing.

Does he have to teach his band their parts? “Well, the guys are my best friends, but they’re also amazing musicians,” he says. “They usually pick it up themselves. Sometimes I have to show them little things. I used to be protective about what kind of drum fills to do and stuff, but I quickly realised that stuffing someone’s musical personalty into a box only makes it sound stifled and contrived. Letting the guys play how they want to play makes for a better performance and vibe.”

Some long-term fans may not be keen on Tame’s new blissed-out vibes and synth-funk sound. Does he check Twitter for negative comments?

“I assumed there were going to be a lot of people into guitar rock who believed the sound of a keyboard represented a different type of music or perspective from guitar music,” he considers. “But part of me doing this album was to prove to myself, and other people, that they can all mean the same thing. I don’t see a huge line in the sand that others do, that guitars represent organic rock music and synths belong to digital electronic music. The only thing that’s different is one is plucking a string and the other is pressing a key.”

Rock music and pharmaceuticals often go hand in hand and Prog did read an article where Parker admitted to spliffing up in the studio, which was a surprise because his multilayered music clearly requires a lot of focus.

“Sure,” he nods. “For me it’s about being relaxed enough to be completely absorbed by the music. The more drawn in by the music you can be, the better. You have to allow creativity to flow. That’s not to say I start a recording session absolutely zapped. I drink while I’m recording because I drink while I’m doing anything that’s fun! And if there’s a spliff there, I’ll smoke it. But I hate the idea that I rely on alcohol or weed to be creative. That would be depressing.”

It was widely reported that in the run-up to recording Currents, Parker split up with his girlfriend, Melody Prochet of French shoegaze outfit Melody’s Echo Chamber. He agrees that there is, as a result, a loose concept with a theme about change running through the album.

“Definitely,” he says. “The songs are like chapters. The first song, Let It Happen, for example, is a long, drawn-out progressive song where this person finds himself in a world of chaos and there are these forces pulling him and he decides to stop resisting them because they’re not such a bad idea.”

It could be a message to himself – to go with the musical flow – or to his audience, to accept Tame’s multifarious peregrinations. Maybe it’s a warning to his future girlfriend? “I don’t think so,” he laughs.

One magazine decided recently that Parker is the new Jim Morrison, the new sex god of alt rock. Has he noticed an increasing number of women in his audience? “Um…” he hesitates, clearly embarrassed and deflecting the question. “I have a terrible eye-contact problem so I never really look at the people in the audience. But I’ll count tonight for you.”

Cheers. He must have detected a slight shift in demographic though? There are moments on Currents that could be mistaken for Daft Punk…

“It’s too early to say – the album has just come out, and things are settling as people make up their minds,” he parries.

Talk about Changesoneparker: he’s the prog voyager, the psych kid, the pop songsmith, the funkadelic stoner… Would the real Kevin Parker please stand up? “I guess I’m none and all of them,” he decides.

What he has realised is that concise three-minute pop songs are no easier to write – harder, in fact – than multipartite song suites.

“Incorporating more pop elements and even writing songs I would consider pop songs has completely flipped my perception of how easy it is to write a pop song, an alternative song or even a prog song,” he declares.

“Writing pop music is the hardest thing I’ve ever had to do. With alternative music and prog music the possibilities are endless: you almost can’t make a mistake. As long as you’re being free-flowing and expressive then it will be unique and cool and something different. With pop there are rules: you have to fit it into this amount of time, you have to build up the chorus to have an impact. It has these parameters.

“I like complex music,” he adds, “but I also love those up and down pop songs, an arrow to the heart, an instant thing with a moving quality. I believe in the power of pop.”

Currents is out now on Fiction. For more information, see www.tameimpala.com.