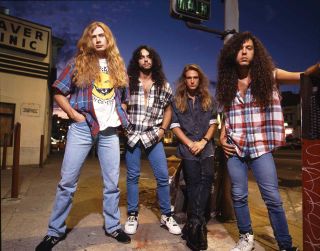 Near the end of 1991 – just months after Megadeth’s latest album, Rust In Peace, earned the band their third gold record – singer/guitarist Dave Mustaine sent demos of several new songs to the band’s record company. The group were scheduled to track their fifth album with producer Max Norman (Ozzy Osbourne, Death Angel) shortly after New Year’s Day, and the label wanted to make sure they were ready.

“I don’t know that I was there when this happened,” Dave says, “but [bassist David] Ellefson said that they said we needed a couple more songs – more songs, better songs, longer songs, I don’t know.” Soon after, Mustaine picked up his guitar and came up with a powerhouse riff that, along with Enter Sandman and Smells Like Teen Spirit, would become arguably one of the three most iconic heavy riffs of the entire decade. “It was one of those songs where you play the riff, and all of a sudden, something inside you just perks up,” Dave recalls.

Still, the song that would become Symphony Of Destruction – which would soon catapult Megadeth out of the metal underground and into the rock mainstream – was far from finished. “The chorus and the verse were still two completely separate moments,” Dave says. “That’s usually how my songwriting goes – I write riffs, and then I try to assemble them.”

As he wrote the music for the song’s chorus, Mustaine says he drew from none other than the Fab Four. “The chorus is just a moving chord progression,” he says. “I got that inspiration from when The Beatles had moving bass chords under their chords.” The song’s chugging bass line, meanwhile, was inspired by a Queensrÿche song that he heard on a Los Angeles radio station. “They were playing Jet City Woman and I went, ‘That’s the bass part. That’s what I want,’” Dave recalls. “It’s cool, because you never know where you’re going to get your musical inspiration from.”

The same can be said of the lyrics, some of which came to Mustaine as he was driving. “I wrote them on the back of a sushi receipt, because I was kickboxing and preparing for my first black belt, and I would go eat sushi pretty regularly after I would train,” he says. “That same sushi restaurant was the place where I got the girl in Countdown To Extinction to say, ‘One hour from now.’ It wasn’t just good sushi – I got two songs out of them!”

Lyrically, Symphony Of Destruction – which Dave says was inspired by the classic film and book The Manchurian Candidate – describes the dangers of the ‘Pied Piper’ effect, where citizens blindly “dance like marionettes” to the will of corrupt political leaders. While its tone is undeniably cynical, he says took care to avoid passing final judgment himself.

“I don’t think it’s my place to say who’s smart and who’s stupid,” he says. “I think that’s evident once people get the facts for themselves. That’s why I always try and encourage our fans to decide for themselves. Not knowing something is ignorant, and knowing something and choosing the wrong thing is stupid, so you’ve got to ask yourself when things go wrong: ‘Was it an ignorant mistake, or a stupid mistake?’ I don’t try to point out stupidity, and I don’t like to make people feel bad – unless they piss me off.”

Once the song was fully written, Mustaine and his bandmates recorded a demo, which clocks in at 88 seconds longer than the version metal fans around the world would soon come to know and love. (The demo appears as a bonus track on a 2004 reissue.) Dave is quick to acknowledge the input of producer Norman, who proposed moving the final verse from before Marty Friedman’s guitar solo to the end of the song.

“I can’t take credit for Max Norman’s genius,” Mustaine says. “He’s an amazing producer and engineer. Before we even went into the studio together, I had given Max the demo tapes. I don’t know if it’s the arrogance of the people we’ve worked with, but he’s the only person who ever came back to me with notes on the songs.

"I’ve always listened to the suggestions of the people I work with. It doesn’t mean I do what they say, but I listen. That’s what you pay these guys for, and they can make some pretty sizable improvements if you’re man enough to listen.”

Dave says he followed a similar path when the band’s record label chose Symphony… to be the album’s first single. “Remember, you’re talking about a band that didn’t have singles,” he says.

“We’d just pick cool songs and make videos and pray that we’d get on MTV. Symphony… was our first bona fide single – everything else was just songs that we got lucky to get airplay for.”

Symphony... unquestionably broke that mould. The song would peak at No.15 on the UK singles chart, while back home its music video saw Megadeth graduate from the Saturday night wasteland of Headbanger’s Ball into the weekday afternoon playlists of viewer request countdown show Dial MTV.

The clip even made a respectable showing on the channel’s Top 100 Videos of 1992 year-end countdown, where, at No.68, the band found themselves sandwiched between Madonna and U2.

In no small part due to Symphony…, Countdown To Extinction debuted at No.2 on the Billboard 200 in the U.S. and No.5 in the UK upon its release, and would quickly earn the band their first platinum – and, to date, their only double-platinum – record. “It’s funny when you start to make inroads like that,” Dave reflects.

“A lot of people who are in our business now weren’t around back then, and they don’t know how we got treated,” he continues. “They don’t know the doors that had to be constantly beaten on and kicked down just to get some recognition.

"Everybody thinks, ‘I can walk around with my tattoos and I’m some bad-ass in a band,’ and all that kind of stuff. It wasn’t like that back then. If you were in a band, you had to struggle. You lost friendships; you saw relationships go in the trash. It was like, ‘What’s your primary love?’”

While the primary riff of Symphony… wasn’t as intricate as most of Megadeth’s previous material, Dave says he was never concerned about how the song would be received by the group’s fans.

“When you write songs that are busy, and then you write something that isn’t but it still satiates you, there’s something to be said for that,” he says. “The opening riff, it’s a world-famous riff now, and the cool thing is that it’s taken on a kind of folklore.”

He references a performance of the song during a Megadeth concert in Buenos Aries in 1994, soon after the country relaxed its laws and began allowing more Western acts to perform.

“The fans embraced us, and we ended up doing five sold-out shows in a row,” he remembers. “It began the love story between Dave Mustaine and Argentina.”

As the band played the opening notes of Symphony…, the rabid Latin American crowd began to chant along in unison. (A live DVD, That One Night – Live In Buenos Aries, Argentina, which can also be seen on YouTube, captures a similar moment.)

Says Dave, “I stopped in the middle of the song and said, ‘What are you saying?’ They said, ‘Aguante Megadeth!’ ‘Aguante’ means keep going, and the kids were going ‘A-guan-te Me-ga-deth’ along to the riff.”

According to Setlist.fm, that 1994 performance is one of more than 1,400 times Megadeth has played Symphony… to date – and as the band’s lone constant, only Mustaine has been on stage for all 1,400-plus.

Does he still enjoy looking down and seeing the song on the group’s setlists after all these years? “Yeah, truth be told,” he says. “It’s nice to be able to look down at the setlist and see anything!”