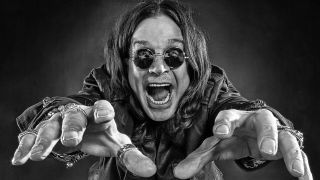 Ozzy Osbourne is in the midst of his long bow out from touring, including a trek across the UK and Ireland in February with Judas Priest! But what do you ask the man who has seen and done it all? We collected questions from some of the biggest musicians in our world. And as you’d expect with the Double O, he’s not one to shy away from giving an answer… even if it’s not necessarily to the question you asked.

Jonathan Davis from Korn asks:
Do you still have the same passion for music in your 60s as you did when you were 20?

Ozzy: “To be honest with you, I don’t know anything else, I’m no good at anything else. People think I’m retiring, I’m not retiring, I’m just not going to go on the road for fucking five years at a time. I’ll still do gigs, just not world tours. It’s in my blood. I’ve never done anything else for 50 years. It’s a bit late in the day to go, ‘I don’t like music any more’! Ha ha ha!”

Dani Winter-Bates from Bury Tomorrow asks:
Was there a point in your career where you thought, ‘This is really big, I’m revolutionising heavy music’?

Ozzy: “No. With Sabbath we just did it. I don’t know how to describe it. There were bands like Cream and Led Zeppelin, and they had this edge, and The Kinks’ You Really Got Me. I was just playing it on my iPad, it’s simple riffs, but I remember when I first heard it – it sent a chill down my spine. That’s what we went for – making your hair stand on end.”

Simone Simons from Epica asks:
What kept you going through the tough times in your career? And was there a certain path that you were trying to follow?

Ozzy: “I was trying to find the path home, fucking loaded and drunk. I’m the luckiest man on the fucking face of the Earth. So many people in the last couple of years have died in the business, not only in metal, but Prince, Bowie, Lemmy… I wasn’t any better. I kind of think I’m living on borrowed time anyway. I used to do cocaine, smoke dope, heroin… the lot of them over the years. I’m not saying I’m disappointed, but I really did burn the candle at both ends every day. Don’t think you can take a feather out of my cap because I’m just a lucky son of a bitch.”

Dani Filth from Cradle Of Filth asks:
How do you feel being from Birmingham has influenced your career path and how has living in America changed your outlook on those early days?

Ozzy: “Birmingham is where I grew up. When I got married to my first wife I moved to Staffordshire, then I married Sharon and moved to London, the kids liked it in the sun in Los Angeles so they moved out here… but I don’t consider myself to be an American. I still have a house in Buckinghamshire, which I go back to fairly regularly, but the work is here. I couldn’t have expected to survive for 50 years in England only. I’m still English, I’m not going to put my hand on my heart and pledge my allegiance to the American flag.”

theOGM and Eaddy from Ho99o9 ask:
Have you ever blown out your voice on tour or in the middle of a show and how did you handle it?

Ozzy: “Every fucking night! Ha ha ha! But with brutal honesty, I had to slow the gigs down because I kept blowing my voice and I still do. You’ve only got one voice and it’s the luck of the draw – sometimes I get away with it, sometimes I stop the show and go, ‘I’m singing like a fucking asshole tonight.’ You know when you’re on and you know when you ain’t on, but you do the best you can.”

Brann Dailor from Mastodon asks:
How difficult was it for you moving on after the loss of Randy Rhoads?

Ozzy: “I had a pretty rough time, as it happens. I remember I’d left Sabbath, gone back to Sabbath, got fired from Sabbath, my ex-wife divorced me, my father died and then just as I discovered Randy Rhoads, he gets killed. I remember looking at this burning inferno of a house where the plane had crashed, thinking, ‘This is fucking insane, I’m done,’ and if it wasn’t for Sharon who said, ‘No, you’re not going to stop, Randy wouldn’t have liked that, you’ve got to keep his memory alive…’ We did Madison Square Garden with Bernie Tormé, and he was rushed in at the last minute, didn’t know what he was getting into, but he did me a great favour. If it wasn’t for him I wouldn’t be doing it now. I’d have given up.”

Matt Tuck from Bullet For My Valentine asks:
What’s the one album you couldn’t live without, and why?

Ozzy: “The Beatles turned me on to music in the first place, they covered it all, and I don’t think there’s a bad Beatles album. If I had to choose one, it’d be Sgt. Pepper’s Lonely Hearts Club Band. There’s a song on that album for nearly everyone. Sometimes people say they can hear The Beatles in my melodies, but that’s the greatest thing, they had great melodies. I’m not into this growling stuff, but some people like it. One of the things I’m proud of is the fact we give people in our genre a stage at Ozzfest – all kinds of stuff comes out of that. It’s my way of passing the torch on.”

Harriet Hyde from Black Moth asks:
There are so many bands out there who are unapologetically influenced by Sabbath. Do you ever listen to bands that sound like you?

Ozzy: “If I do listen to too much of the same music I play, and I like some of it, it inadvertently comes out in my stuff. When we do Ozzfest, bands say they love Sabbath, but I don’t know how to take compliments, I kind of shy away from it. I just do what I do because it makes me happy, and if it makes other people happy then fine.”

Amalie Bruun from Myrkur asks:
Do you enjoy visiting Denmark and have you been to see anything exciting here?

Ozzy: “Right at the beginning of Sabbath, we had a residency at a place there called the Revolution club and it was Tony’s 21st birthday. We only had a certain amount of dough in the float and Tony was loaded, spent the fucking money, and we didn’t know how we’d get home! But we managed it. In any band that I’ve been in, the early days have always been the funniest, because you’ve got nothing to lose.”

Ben Ward from Orange Goblin asks:
Who’s the craziest rockstar you have ever come across and what’s the funniest story you can tell about them?

Ozzy: “Maybe it’s me? Ha! I’ve done some pretty fucking weird things over the years. People come up to me and ask, ‘Is it true you snorted a ants when you were one tour with Mötley Crüe?’ Yes. But I don’t do that any more. I lived the role for fucking years, but if I wanted to live to see my grandchildren I had to fucking slow down a bit. I don’t drink any more, I don’t smoke tobacco any more. I did all of the above and then some. Rock’n’roll needs a lunatic from time to time. The more fucked-up I was going to a gig, people were saying, ‘It’s going to be fun tonight, he’s loaded again!’”

Liam Cormier from Cancer Bats asks:
My band and I play Black Sabbath covers and the one thing that always throws me off are people singing the wrong lyrics to War Pigs. Have you ever had that happen?

Ozzy: “What I have to be careful of is script books with the musical notes. One said, ‘Three specks in the sky warn you you’re gonna die’ [for Electric Funeral] when the lyrics are ‘Reflex in the sky.’ Three specks? What the fuck does that mean. A speck in the sky? They must have been taking some heavy acid or something. But the crowd can sing any old shit. When I’m up there I’ve got the teleprompter, and I’m dyslexic so I read it backwards anyway. I’m not that serious about lyrics, as long as they’re all singing and having fun I couldn’t give a fuck.”

Brian Tatler from Diamond Head asks:
What are your favourite albums from your career? Both Sabbath and solo.

Ozzy: “The first five Sabbath albums, when we were still on even terms. After [1973’s] Sabbath Bloody Sabbath, we realised we were being taken for a ride and getting ripped off. The follow-up to Diary Of A Madman [1983’s Bark At The Moon], I was on a burnout. Whenever I listen to some of my old works it’s like a reflection of where my head was at at the time, and Randy had just died, and I was running on overdrive all the time. To be perfectly honest, I’ve started playing more and more of [1995’s] Ozzmosis. But I flip from that to No More Tears. It fucks me off when a record company adds another live track to a great album; the running order’s the same but there’s an extra track from some show I did to sell more records. They’re just reedy.”

Enid Williams from Girlschool asks:
If you could live on another planet, which one would it be?

Ozzy: “Oh fucking hell. I’ve only just realised I’m living on this fucking planet – I’ve just landed! Never mind about going to Mars, we should try to clean this place up. In my lifetime I’ve seen some fucked-up things happen to this planet. It would be nice to find a new Earth with clean air.”

Cardinal Copia from Ghost asks:
I read that originally Iron Man was called ‘Iron Bloke’. Is that true, and if so could you imagine yourself singing that song?

Ozzy: “Iron Bloke? Is this guy smoking dope? Iron Bloke. It wasn’t called Iron Bloke, it’s Iron Man. He must have been reading it on a toilet wall. It was always Iron Man.”

Corey Taylor from Slipknot/Stone Sour asks:
Is there anything left that you haven’t done?

Ozzy: “I think I’ve pretty well covered it. I’ve had hit records, great gigs, bad gigs and bad albums. But I just don’t stop at the first hurdle. After getting over the death of Randy – and to this day when I talk about it, the tape runs in my head of that day – just living through that, surviving, continuing to do what I do and having the respect of people. If it ends right now, I’ve got a head full of memories.”

Tickets will go on sale here September 7 at 9am GMT.