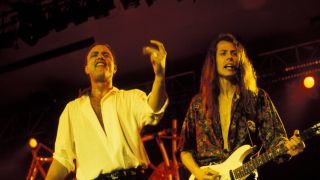 July 1990. Queensrÿche are in New York, promoting the upcoming album Empire. Well, Geoff Tate and Chris DeGarmo are on board for a spree of interviews, with interest in the band reaching a new peak, or plateau, after the success of 1988's conceptual Operation: Mindcrime.

This new album, though, is different. Not only because it’s definitely a twist away from the storyline approach of the astonishing …Mindcrime, but also because if anything it’s darker than the band have ever been before. Even on the previous album, with all its tragic and depressing overtones, there was a sense of unreality. This wasn’t a cathartic experience at all, just a band playing around )albeit expertly) with plots and sub-plots. It was escapism.

In fact, Queensrÿche had built their career so far on exactly that premise. Making albums which allowed them, as much as their audience, to get away from their true feelings and sense of fear. But Empire… it was as if the mental dam had been busted wide open. This was a record that reeked of personal paranoia and was soaked in vulnerability. Beneath the complex tunefulness lurked a complexity of the mind. It came across as a band who were deeply uncertain. Of their talent. Of themselves. Of everyone

The clue was in the opening lines of The Best I Can, the album’s first track: ‘A child alone in daddy’s room/The gun was hidden here’. It was…frightening, revealing. On Silent Lucidity, it’s claimed ‘Your mind tricked you to feel the pain/Of someone close to you leaving the game of life’.

Both songs were solely the work of guitarist DeGarmo, and he was clearly reaching inside his own psyche. It was a brief unmasking, but one that told of an agitated, corrosive personality. Someone who reached out in order to close everything down.

I was out there to interview the band for RAW magazine. And I talked to vocalist Tate and DeGarmo separately. Much of what ended up in print followed the usual band formula of promoting the new album, through the sort of answers they probably trotted out hundreds of times in a short period of intense interview schedules. It was the bluster and blather which everyone – labels, management, band, media and fans – expected. But out of the blue, DeGarmo then asked if we could meet for breakfast the next day. He wanted to talk off the record. But then off the record became on the record. However, it was so uncomfortable and fitful that it was virtually unusable at the time. It was clear DeGarmo had certain things he felt the need to brush away from him – emotional baggage. He wasn’t so much opening up, as triggering a new shut down. I was the conduit.

This has never been in print before, because… well, it’s not really the stuff of happy, positive writing. It’s disjointed, but maybe now, 24 years later, it is time to put it down, and let people make up their own minds. So, with a slight tremble of trepidation, here goes. DeGarmo’s comments on five subjects.

“My dad abandoned us, his family, when I was young I don’t know. Was it my fault? Maybe he couldn’t handle the pressure Of what a family did to him. You’re a person, who suddenly isn’t a person, but a provider. Do families do that to you? Everyone looks up to the husband, the father and demands from him. Is that fair? That’s what I mean by the line ‘A young now in a private chair’. That’s in The Best I Can. I am a private person. But to be the best man I can be I have to compromise my privacy. Will I turn into my father and abandon those who rely on me just to be the best I can? I don’t know.”

“I’m not sure what I feel about the band right now. Whenever we finish a record, I think it’s time to leave. Or we should split up. I am drained, and fed up. I don’t have the energy to deal with the other guys. I get annoyed with them all, because I feel they’ve let me down. But then, I also think I’ve let them down. Is that the way all musicians think? It’s that love/hate thing we have, isn’t it? Empire is maybe the worst album we’ve ever made, or the best. I can’t judge it.”

“Do they count? I don’t know. There’s a part of me that feels that nobody else has the right to like or hate what comes from me. They don’t know me, so they shouldn’t judge. But then if I feel like that why am I in a band who release songs to the public, who play live for the public, who talk to the media who are strangers? Is my creativity only legitimised by the opinions of others? Is that the truth? I suppose it’s like the old problem of does a tree make a sound when it falls in the forest if nobody’s there to hear it. Am I just more needy than most people, because I only exist through the reactions of others.”

“The way I feel right now, I don’t know if I have a future, and I am not talking about just as a musician. I am not suicidal. But I have doubts. Real doubts. I don’t even know why I am talking like this It won’t make me feel any better. Probably by tomorrow, I will be upbeat and shiny again. But I always question whether I want to carry on as I am. Maybe I will pack my bags, walk out of this hotel, out of this life and start all over again. But I’ve not done that so far, so why would I do it now?”

On why he’s decided to talk like this now?

“Oh, I do that every so often. Maybe this is all bullshit, and I am acting out a role, and you just happen to be the chosen audience. Can you tell whether what I’ve said is real or imagination? Perhaps I’m challenging you to find the truth from the fiction in Chris DeGarmo. Maybe I want you to tell me. Because I don’t know. You can print anything I’ve said just now. I may thank you, or hate you for it. Or both.”

I am still unsure whether DeGarmo was playing a game, or genuinely baffled by what life at the time had given him. The feeling I had was that, in purely musical terms, he felt Queensrÿche were dead to him. It was to take seven more years, before he quit. But the underlying context was that he had no more to gain from being in this band, and they had nothing more to achieve with him. So, is Empire the band’s finest album? Or the start of a decline. Your call.