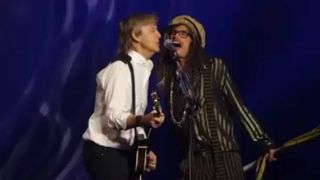 Steven Tyler and Paul McCartney teamed up to duet on a version of The Beatles’ classic 1968 song Helter Skelter in Las Vegas.

The Aerosmith singer joined the ex-Beatle onstage during the encore at McCartney’s show at the T-Mobile Arena in Las Vegas on Friday, June 28.

“We have a special guest for you: Mr. Steven Tyler,” announced McCartney. The pair then launched into the song, trading alternate lines with each other before improvising a vocal outro.

Tyler and Aerosmith recorded a version of the song, which originally appeared on The Beatles’ self-titled 1968 album (aka The White Album), during sessions for 1975’s Toys In The Attic. It was eventually released as part of 1994 box set Pandora’s Box.

Aerosmith are currently in the middle of their Deuces Are Wild Las Vegas residency.