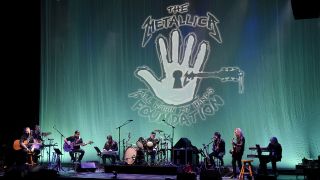 Metallica have released a video showcasing their acoustic version of their 1991 classic Enter Sandman.

The footage was captured at their rare acoustic performance in San Francisco back in November last year, which came after the raised $1.3 million on the night for their All Within My Hands Foundation.

The laid-back version of Enter Sandman is a far cry from the blistering original, and appears on Metallica’s Helping Hands… Live & Acoustic At The Masonic album, which was released last week through independent record stores and on digital and streaming platforms.

Money raised at the show has been split between Feeding America and the American Association of Community Colleges.

Meanwhile, Metallica are gearing up for their return to the UK and Europe on the latest leg of their WorldWired tour, while the band also recently revealed that their new beer called Enter Night – a collaboration with Stone Brewing – is on its way to Europe, Australia and China.