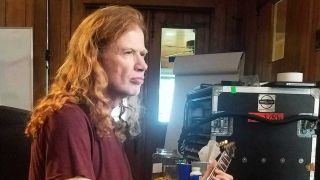 Dave Mustaine is back in the studio working on the new Megadeth album just days after revealing that he has been diagnosed with throat cancer.

Megadeth drummer Dirk Verbeuren posted a picture of the frontman in the studio on Instagram with the caption: "@davemustaine working on #megaalbum16 like a true warrior. Let's keep Dave and his family in our thoughts."

@davemustaine working on #megaalbum16 like a true warrior. Let's keep Dave and his family in our thoughts. #davemustaine #megadeth Dirk Verbeuren

Earlier in June Mustaine revealed that he had been diagnosed with throat cancer, forcing the band to cancel all upcoming Megadeth shows with the exception of the 2019 Megacruise.

Mustaine said: “I’m working closely with my doctors, and we’ve mapped out a treatment plan which they feel has a 90% success rate. Treatment has already begun.”

Megadeth bassist Dave Ellefson recently called Mustaine “a warrior… a fighter” in light of his diagnosis.

“We're optimistic about the treatments and the success rate is usually pretty good on this one, so I think there's a lot of optimism at the end of this whole thing,” said Ellefson