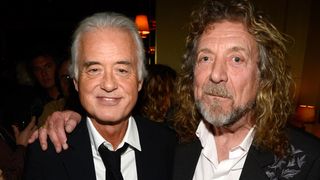 In June 2016, after one of the most talked-about music business court cases of recent years, Led Zeppelin were cleared of basing the descending chord sequence heard at the beginning of Stairway To Heaven on Spirit’s 1968 track Taurus.

Spirit’s Randy California mentioned the two songs’ similarity in the liner notes for the 1996 reissue of Spirit’s first album, but it wasn’t until May 2014 that the band’s bass player, Mark Andes, filed legal papers in Pennsylvania in an attempt to stop the re-release of the track as part of Led Zeppelin’s remaster series, asking that California receive a co-writing credit and appropriate payment.

In October of that year a judge ruled that the action could go ahead, and in May 2015 lawyers for Led Zeppelin responded, filing papers in California that refuted the accusation of copyright breach and claimed that the band didn’t have enough knowledge of the case to answer it. In February of 2016 Jimmy Page stated in a court declaration that he hadn’t heard Taurus until 2014, but two months later a judge ruled that both Page and Robert Plant would face a jury trial. A date was set for May 10, but Los Angeles federal judge Gary Klausner delayed the start until June 14, when the trial began in a federal courtroom in Los Angeles.

This is how it played out…

The trial opened with both Page and Plant present. A 10 hour limit was imposed by Judge Gary Klausner, meaning it would last a maximum of three or four days.

Francis Malofiy, the lawyer representing the estate of late Spirit guitarist Randy California said in his opening statement that the case came down to six words: “Give credit where credit is due.”

Led Zeppelin’s representative, Peter Anderson, countered that: “45 years ago Jimmy Page and Robert Plant wrote some of the greatest songs in rock’n’roll history – half a century later they’re being sued for it.”

Neither Page nor Plant spoke during the hearing.

Page arrived at the court house carrying a guitar case, in anticipation of having to play for the judge and jury (in the end he doesn’t).

In the witness stand, he admitted to owning several Spirit albums. He told the court that his son-in-law brought the comparison to his attention a few years ago: “When I heard the orchestral part at the beginning I knew I’d never heard it before. When it started I was confused by the comparison: ‘What’s this got to do with Stairway?’”

Asked about a concert in 1969 where Led Zeppelin opened for Vanilla Fudge and Spirit, he said he hadn’t known that the latter were on the bill, though he agreed that Zeppelin had regularly performed a section of Spirit’s Fresh–Garbage, which appears alongside Taurus on their debut album.

Questioned about an interview in which he was quoted saying, “Spirit is a band I really love,” Page replied: “I don’t remember. It could be distorted – in those days they still sort of jotted things down on notepads.”

Page took the witness stand to testify again, arguing that the chord sequence “has been around for ever”. Musician Kevin Hanson, who is called as an expert witness, countered that “to my ear [Taurus and Stairway To Heaven] sound like one piece of music.”

Spirit’s lawyer, Francis Malofiy, was reprimanded by the judge, who told him, “You’re wasting a lot of time”, after he attempted to produce evidence that wasn’t on the court’s list of exhibits.

It was revealed that in 2015 the members of Led Zeppelin shared out more than £6.6 million from royalty payments accrued by the band’s catalogue.

Led Zeppelin bassist John Paul Jones made a brief appearance in the witness stand, saying that Page had never discussed Taurus with him.

Music expert Lawrence Ferrara played an electric piano to demonstrate that the similarities between Stairway To Heaven and Taurus were “absolutely meaningless.”

He pointed out that the descending chord sequence at the beginning of Stairway had “been around for 300 years… they are a musical building block that no one can possibly own.”

It was revealed that Zeppelin’s back catalogue earned more than $60 million between 2011 and 2014.

After a break for the weekend, Page and Plant’s team asked the judge to halt proceedings and make a decision without consulting the jury, arguing that Francis Malofiy had failed to present sufficient evidence to support his position or prove that any member of Led Zeppelin had heard Taurus before composing Stairway. The motion was rejected and the trial proceeded.

Robert Plant took the witness stand for the first time. He caused laughter in the courthouse when, asked if hung out with Spirit after a concert in 1970, he replied: “I don’t have a recollection of almost anyone I’ve hung out with.”

However, he did say that he clearly remembered working on Stairway To Heaven with Page at Headley Grange in Hampshire.

The jury retired to consider their verdict, though not before a heated exchange between the two parties’ lawyers.

“We respect and value creation,” said Francis Malofiy. “‘Creation’ does not mean copying. ‘Creation’ means doing something that is unique and memorable.” He asked the eight-person jury to grant one-third of writing credits for Stairway To Heaven to California’s estate.

Peter Anderson argued that Malofiy had failed to prove that Page or Plant had ever heard the earlier work, saying: “There has been no evidence showing that Taurus was performed at any performance where members of Led Zeppelin were in attendance.” He added that Malofiy had exaggerated the amount of money Stairway had generated.

Both were admonished by the judge, who said: “Any other catfights or anything else?”

The jury decided that Zeppelin did not plaigiarse Taurus, ruling that it was not “intrinsically similar” to Stairway To Heaven’s opening. Page and Plant were both cleared of the charge of plagiarism.

The pair issued a joint statement: “We are grateful for the jury’s conscientious service and pleased that it has ruled in our favour, putting to rest questions about the origins of Stairway To Heaven and confirming what we have known for 45 years.”

The biggest music trial of recent times had ended, and Led Zeppelin emerged victorious. The long term impact– good or bad – on the music industry remains to be seen.

The US Ninth Circuit Court Of Appeals finds that the jury at the original trial were instructed improperly on a number of issues, clearing the way for a second trial. In a statement, they said, "The panel held that certain of the district court’s jury instructions were erroneous and prejudicial."

The plaintiff in the case is Michael Skidmore, the trustee for the estate of Spirit songwriter Randy Wolfe – better known as Randy California – who died in 1997.