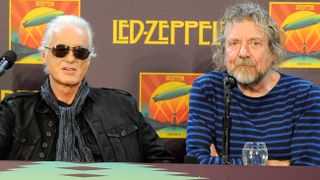 A US judge has ruled that Led Zeppelin guitarist Jimmy Page and singer Robert Plant must face a jury over claims that parts of Stairway To Heaven were copied from another song.

The estate of Spirit guitarist Randy California raised a lawsuit two years ago, stating that the band’s 1967 instrumental Taurus was the source of the opening sequence from Zeppelin’s 1971 classic.

California had said in interviews before his 1997 death that he had no doubt his work had been copied. But Page last year dismissed the suggestion as “ridiculous,” and in February declared that he’d never listened to Taurus until confronted with the lawsuit.

Michael Skidmore, representing California’s estate, said that Page could have heard the piece while the two bands toured the US together in 1968 and 1969.

Led Zeppelin’s legal defence has not been based on the alleged similarity between songs, but on whether the Spirit party have any right to act over the matter. It’s argued that California wrote Taurus under a contract that surrendered all rights to his work, and that he dismissed any claim in a 1991 interview in which he said: “I’ll let them have the beginning of Taurus for their song without a lawsuit.”

Zeppelin further argue that the chord progression at the core of the argument is so well-used that it doesn’t warrant legal protection.

However, Central District of California Judge Gary Klausner has ruled that the pieces are similar enough to let a jury decide whether Plant and Page are liable for copyright infringement, while dismissing claims against bassist John Paul Jones and the band’s record label.

Klausner writes in his judgement: “While it is true that a descending chromatic four-chord progression is a common convention, the similarities here transcend this core structure.

“What remains in a subjective assessment of the ‘concept and feel’ of two works… a task no more suitable for a judge than for a jury.”

He adds that California’s contract means that his estate could only possibly receive half of any damages that might be awarded.

A lawyer for the estate says: “This case has always been about giving credit where credit was due. Now we get to right that wrong.”

The hearing is set to begin on May 10 at the Central District of California Court.