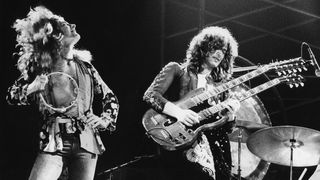 In 2014, Jimmy Page talked to Classic Rock about the making of Led Zeppelin IV and Stairway To Heaven.

“We were routining Stairway To Heaven and it was tricky going through it without having any verses to it,” says Page of writing the song. “And while were going through it and everyone was learning it, Robert [Plant] was writing lyrics in the same room on his pad. And he eventually came to the mike and started singing, and it was, like, ‘Wow, we’re really onto something here, cos his lyrics are superb on it.’”

Earlier this year, Page and former Led Zeppelin bandmate Robert Plant recently faced plagiarism charges brought by the estate of late Spirit frontman Randy California. They were accused of having copied the opening chords of Stairway To Heaven from Spirit’s 1968 song Taurus. A jury ruled that Led Zeppelin did not plagiarise the track.

Page will be appearing at this year’s Classic Rock Awards, the first time they’ve been held in Japan.