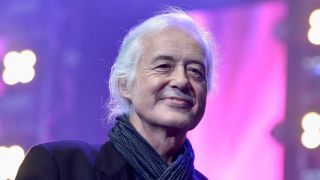 Led Zeppelin are to be sued by Spirit bassist Mark Andes over iconic track Stairway To Heaven's similarity to a piece released by his band three years earlier.

They launched a composition called Taurus in 1968, and soon afterwards Led Zep supported them on their first-ever US tour. Stairway was released in 1971 on Led Zeppelin IV – but members of Spirit always claimed the opening acoustic guitar phrase was lifted from Taurus.

Late guitarist Randy California, who died in 1997, once commented: “I’d say it was a rip-off. The guys made millions of bucks on it and never said, ‘Thank you’ – never said, ‘Can we pay you some money?’ It’s a sore point with me.”

Now Andes is gearing up to file papers in an attempt to stop the re-release of the track as part of Led Zep’s remaster series, unless California gets a co-writing credit and appropriate payment.

He says Jimmy Page and co heard the song on the road in 1968, and tells Business Week: “It was such a pretty moment, and it would typically come after a big forceful number. They would have seen it in that context. We did quite a few shows with those guys – not to say they might have heard it from the record.”

He says of his plans for legal action: “It would just be nice if the Led Zeppelin guys gave Randy a little nod. That would be lovely.”

The British outfit have been sued in the past over their compositions, with guitarist Page having said he chose to follow a tradition of taking previously-written material and creating “variations.” As a result of legal action they’ve assigned co-writing credits on Whole Lotta Love, The Lemon Song and Babe I’m Gonna Leave You.

Meanwhile, Page says he’s tired of Robert Plant “playing games” over the chances of another reunion.

The vocalist recently slammed home why he didn’t want to go on tour after their 2007 Celebration Day show – but his bandmate is still stung over a comment made last year.

Page tells the New York Times: “I was told last year that Robert said he was doing nothing in 2014, and what do the other two guys think? Well, he knows what the other guys think. Everyone would love to play more concerts. He’s just playing games – and I’m fed up with it, to be honest with you.

“I don’t sing, so I can’t do much about it. It just looks so unlikely, doesn’t it? I definitely want to play live. Because, you know, I’ve still got a twinkle in my eye. I can still play.”