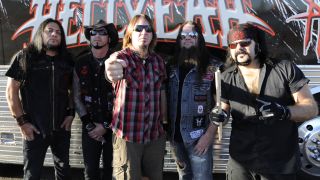 On the morning of October 31st, 2006, news broke that a band had decided on a name for itself. The only thing giving this acutely unremarkable event any distinction was that this particular ensemble would include Nothingface bassist Jerry Montano and guitarist Tom Maxwell, Mudvayne singer Chad Gray and guitarist Greg Tribbett, and one-time Pantera/Damageplan drummer Vinnie. Paul. Abbott.

Muted rumours of a supergroup had already surfaced, but it wasn’t until its assembled cast of musicians had settled on a moniker that they could really be given credence. The band would be called Hellyeah, and – for Vinnie Paul at least – it was more than a new project. It was a new beginning, because Hellyeah would be the first group he’d play in since he witnessed the murder of his own brother, ex-Pantera/Damageplan guitarist Dimebag Darrell, while playing on stage with Damageplan at the Alrosa Villa in Columbus, Ohio on December 8, 2004. That the senseless death of one of the greatest guitarists in the history of heavy metal was a tragedy cannot be overstated, but this is not the story of that dismal night. It’s about what happened in the aftermath of inestimable loss: the birth of a band whose ethos is so brilliantly personified by the sheer obviousness of its name.

The seeds of Hellyeah were planted six years ago, when Washington DC’s Nothingface earned a slot on Pantera’s Reinventing The Steel tour. A friendship that already existed between Vinnie Paul and Nothingface bassist Jerry Montano was strengthened (before Nothingface Montano had played for Pantera label-mates The Deadlights). But it wasn’t until Nothingface toured with Mudvayne the following year that singer Chad Gray began talking about a side-project with Montano and Nothingface guitarist Tom Maxwell. Once the tour was finished they assembled in Nothingface’s Baltimore studio to record a demo that would eventually become Hellyeah track Waging War. But as Mudvayne became busy with their next effort, 2005’s Lost And Found, the project was put on hold. Fast forward to the summer of 2006. Mudvayne were left with a summer off and another chance to pursue the project. And they needed a drummer. “I told them I was busy,” chuckles Vinnie Paul in a moseying Texan drawl. “I’d just gotten my record company [Big Vin] off the ground, we’d just released Rebel Meets Rebel [2006], and I really didn’t know if I was ready to get back in the plan or not. I guess persistence pays off, ’cos the calls kept coming and coming and finally I said, ‘You know what? Sounds like a great fucking idea, let’s do it man.’” It was at that point that Vinnie Paul called Gray, who he didn’t know, to discuss the particulars. It was a 15-minute conversation that would cast the as-yet unnamed band’s attitude in stone.

“He called me up and we kind of shot the shit a little bit,” says Gray. “I said, ‘You know what, Vinnie, I don’t really know you. I know you don’t know me, and I know more about you than you know about me. At the end of the day, it’s going to be five guys jammin’. If it’s something we feel like we want to give to the public then we give it to them, and we’ll be proud of it. If it’s not, it’s just what it is and if nothing else we’ll drink some beers and we’ll make some new friends and it’s all good.’”

Great fucking idea indeed. A few weeks later the assembled ranks of Mudvayne and Nothingface players flew down to Dallas, Texas – the location of a studio built by Dimebag and Vinnie Paul.

“So we’re all just standing in his kitchen and I hadn’t even really talked to the guy,” says Gray. “I was like, ‘OK, what’s going on, we ready to do this?’.”

But there was someone in the room even more nervous than Gray. Vinnie Paul hadn’t sat behind a drum kit since making a well-known surprise appearance alongside Disturbed, Soil, Drowning Pool, and Anthrax at Chicago’s Aragon Ballroom for a Dimebag benefit show on February 23, 2005. For Vinnie that night was more than a chance to pay fitting tribute to his brother. It was an evening when he rediscovered purpose. Of it, he says:

“I thought it was over, man. When Dime went away my heart went with him. I didn’t think I’d ever really be able to do this again. I didn’t touch the drums, I didn’t listen to music, I didn’t do anything for three solid months… I committed myself to playing the first Dime tribute, and the night before I knew that I had to go up and face the drums. I knew I had to sit down and play ‘em, to go over the songs, ’cos I didn’t want to make an ass out of myself. Once I started playing I just started crying. I just went, ‘You know what, man? I love this’. This is what I’ve done my whole fucking life. The drums have been everything to me, performance is everything to me. And the next night when I played with those guys, to hear the crowd, to feel the interaction and them chanting, ‘Dime’… From that point on I knew that I was going to do it again, I just didn’t know when.”

But one last confrontation remained. The Dallas studio that Vinnie Paul and Dimebag had built to give them the freedom to write and record at their leisure had remained virtually untouched since Damageplan last rehearsed before embarking on their final tour, and it still held fresh memories of easier times. “The first night in the studio was very strange,” says Vinnie Paul. “I’m sure it was for everybody just because you walk in the door and there’s all of Dime’s amps exactly like he had ’em left with police tape around them because he didn’t want anybody fuckin’ with his shit. All the pictures on the wall, the gold records, the notes – his handwritten notes from the Damageplan demos before we left to go on tour – it was all really surreal, just a big blur.” As Vinnie Paul describes that night, he was anxiety-stricken about being in a creative position with a band after two years of keeping away, but as the night progressed his inhibitions disappeared and a sense of trust between the musicians was forged. The ideas began flowing.

“Once all the weirdness went away it felt like Dime was right behind us, driving us all the way. I felt really good about it, and it really helped me to breathe normally, so to speak. It was a heavy night, but we got some good tones and just started going. It was that fast. It was like, ‘OK, what have you got?’. It was like, ‘OK, here’s a riff’, and it’s Hellyeah from there…”

In the eight nocturnal days that followed, seven songs were written. It helped matters that despite the short timeframe set by Gray and Montano’s Mudvayne responsibilities, Hellyeah were under no pressure to be overly productive because nobody at US label Epic knew what they were doing. Their secrecy paid creative dividends, but they still didn’t have a name and kept an ever-growing list on a speaker cabinet. Next to the list, someone had written ‘Hellyeah!’ and as Gray relates, that name was better than any of the other candidates because it summed up the atmosphere in the studio, or what Vinnie Paul describes as “a big barbecue, drinkin’ good-time session”.

It was a vibe assisted by good omens. Dimebag’s love of the number three was well remembered by the band. According to Vinnie Paul and Gray, they’d often look up at the clock at precisely 3:33, day or night. It gets spookier. The first demo of the new album’s title track, Hellyeah, was exactly three minutes and 33 seconds long. Believe what you will, but to Vinnie Paul, it was, Dime saying, “Hey man, I’m still here, I’m with you”. For him it was a source of strength through the recording sessions that would eventually produce HellYeah’s debut, an album serrated by ferocious intensity and a distinctly live feel.

“It reminds me of summertime when I was 18 years old when you lit a bonfire, had a kegger, and tried to get a piece of ass,” says Gray. Vinnie Paul agrees.

“It’s a record that hasn’t been made in a long, long time,” he says. “Metal’s really gotten more intricate and faster, louder and harder. It’s really gotten away from two things that we really brought out on this record, and that’s the groove and songs people can remember, songs people want to sing along and headbang to.”

But as horn-worthy as it is, Hellyeah isn’t without its moments of unadulterated emotion, such as the unabashed sentimentality of Thank You, which lyricist Gray wrote to memorialise each of the Hellyeah’s individual losses.

“I lost my grandma like two years ago,” says Gray. “When something like that happens you start questioning yourself, like, ‘Did I ever really say thank you?’. I think Dime and Vinnie had that within themselves and I think it was unspoken. I think they drove each other to strive for their own excellence by watching the other one.”

Other lyrics, such as ‘Judged by a weak little man with a pen in his hand/And just doesn’t fucking get it’ off the nitro-fuelled Matter Of Time have a darker, more venomous bite that Gray explains isn’t a directed attack, but more the expression of his wish to be able to respond to critics who may not appreciate the work poured into the records they’re reviewing or the people behind them.

“I see people looking very fast to rip Hellyeah apart because of the players that are in the band,” says Gray. “We’re pretty vulnerable. I don’t have a personal vendetta against the press or publicity. If you don’t like it don’t buy it, we’re just having a good time with it. And people who come to our live shows are going to have a lot of fun.”

But while trouble within the ranks was already hinted at by the announcement on April 18 2007 that bassist Jerry Montano was leaving on account of what were reservedly referred to as personal differences (“We all love Jerry, we’re going to miss him, but we felt like that was what we needed to do with the band,” says Vinnie Paul). His replacement had recently been announced as ex-Damageplan bassist Bob Zilla.

Besides, HellYeah had bigger things to think about, like an upcoming tour that’d see them appearing at Donington – where the second stage had recently been anointed ‘The Dimebag Darrell Stage’ – and what to do if longtime fans expected to hear Pantera songs.

“We really feel like Hellyeah is a band that can stand up on its own two feet,” says Vinnie Paul. “We’re not gonna cross that bridge. The reason me and Dime did Pantera songs in Damageplan was because we wrote those songs and we wanted people to hear them. This is all about HellYeah and we want to keep it that way.”

The confidence in his voice leaves no doubt as to his intentions, and it’s without doubt that for all its history, Hellyeah is a group fuelled by its past but intent on keeping its gaze firmly ahead. Here’s to new beginnings then. Dime would be proud.

This was published in Metal Hammer issue 167