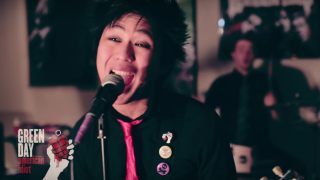 “Our favourite album is ALL OF THEM and we feel that celebrating_ Dookie_’s anniversary doesn’t get any better than this!” say the band.

The medley features highlights from each of the Berkeley trio’s full-length releases, from 1990’s 39/Smooth to their most recent album, 2012’s ¡Tré!, with careful attention paid to the band’s image throughout the past 26 years. The band themselves gave Minority 905 their stamp of approval by posting the video on their official site. Hats off.

If they wanted to make it really authentic, their frontman John could’ve spent 20 minutes shouting ‘I said a-eh-oh!’, over and over. Just saying.

For more information on Minority 905, visit their Facebook page.