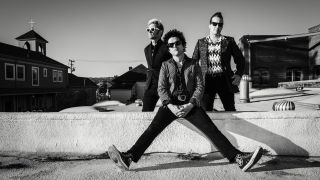 It’s been four years since Green Day last released a single; four years since their trio of vaguely-conceptual Uno! Dos! Tres! albums failed to make much of an impact with, well, anyone at all. It’s fair to say, then, that new single Bang Bang has something to prove.

On first listen, Bang Bang has many of the hallmarks that made the best Green Day songs great: a four-chord chorus full of hooks, riffs that could have belonged to Bad Religion – or any one of their mid-90s cohorts – and a thunderous, bouncing rhythm track. It’s rebellious, fun and snotty, but also glistens with catchy, irresistible pop. The lyrics are lined with that trademark wry humour, which sees the band poking fun at that oft-referenced – if slightly ironic – target of pop-punk ridicule: the plastic cult of celebrity.

But, it also fails to rid itself entirely of the aspects that saw them lose momentum post-American Idiot. The squeaky-clean production won’t be for everyone, the backing vocals are hokey, and a little more grit left on the lead vocals would only have helped Billie Joe Armstrong’s overtly socio-political lyrics pack the punch they need.

Musically, it’s ambitious in a way that Green Day haven’t been for years. That their American Idiot album spawned an entire musical stage show in its wake should be some indication of their talent when it comes to epic musicality – disguised though it is in three minute pop songs – and Bang Bang’s mid-track breakdown is the best example of this ability since that album’s release in 2004.

Granted, Dookie it ain’t, but if the saccharine teen angst of Wake Me Up When September Ends, or the tired pop-punk-by-numbers of Uno! Dos! Tres! left you cold, then this should feel like an encouraging shot in the arm. A return to form? Well, that remains to be seen, but Bang Bang could be a promising step in the right direction.

The A-Z of Green Day