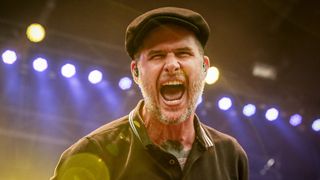 As lead singer for American Celtic punks Dropkick Murphys, Al Barr has been responsible for some of the most rock’n’roll St Patrick’s Day parties of all time. But the band have strongly held political views too, so it’s hardly surprising that the young Al was bowled over by The Clash and their ilk. Here he looks back on the first record he ever truly loved…

The first record that I bought with my own money was actually Burning Love by Elvis Presley when I was in the fourth grade. That didn’t change my life or anything like that, but I knew that I loved singers and Elvis Presley is of course an amazing singer. I grew up listening to a lot of The Beatles as well. But the first album that really impacted my life was the first album by The Clash [The Clash, 1977]. I bought that record when I was 15 years old and it changed everything for me – it defined me and set me on my course. If it wasn’t for Joe Strummer and The Clash then I don’t think Al Barr would be where Al Barr is today. I firmly believe that.

Before I even discovered punk I knew that I didn’t fit in. I knew it all along. So when I discovered The Clash it just made sense. I was hanging out with friends in the seventh and eighth grade that were listening to Pink Floyd, Jimi Hendrix and The Rolling Stones, and that’s all great music too, but here came this new sound and everyone was like, “Urgh!” It was like a dog whistle to them but it didn’t affect me that way. I was young and angry and they were channelling that. It really spoke to me.

Around this time you also had the incident at The Who concert in Ohio where all of those people got crushed, and as a result of that I was forbidden to go to any concerts. My friends were going to see bands like The Kinks and The J. Geils Band and I couldn’t go see any of them, but then I got into punk and that’s where I ruled: there were these things called all ages shows and my parents would say, “You go ahead to your little all ages show. Have a nice time, son.” I’d have to hide all the bruises when I came home.

It was an amazing time and I got to see some amazing bands. I guess I happened to be at the right place at the right time, and in the right era. But if I hadn’t heard The Clash and discovered punk music then that might have interfered with the whole journey that I ended up on, because here I am today.

The Debut Albums Quiz: how well do you know these legendary career starters?