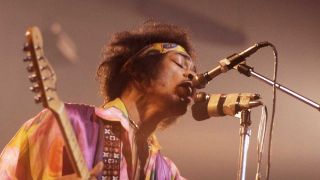 Jimi Hendrix has been voted the Greatest Guitarist Of All Time by readers of the Louder website.

Over 70,000 votes were cast in the poll, with Hendrix topping a list of 50 guitarists, followed by Jimmy Page, Eddie Van Halen, David Gilmour, Eric Clapton and Stevie Ray Vaughan.

Speaking to Classic Rock Magazine in 2009, Joe Satriani - who appears at number 13 in the poll – said, "What makes him great is his choice of notes. That’s a simple way of putting it. That’s so important. What he chose to play is what we chose to love."

"Jimi Hendrix changed the face of music when he landed in London in 1967," says Briony Edwards, Louder's Online Editor. "He arrived in a city that already had its fair share of great guitarists – Page, Clapton, Beck and more – and forced everyone to up their game through the sheer ferocity of his playing.

"There's a lot of familiar names in the poll, which demonstrates the timeless quality of the music these players made, but it's gratifying to see musicians who've become popular more recently, in an age when the guitar hero is supposedly dead – like Joe Bonamassa or Avenged Sevenfold's Synyster Gates – receive so much support from the Louder community. The future is looking bright."

Greatest Guitarists Of All Time: Top 10