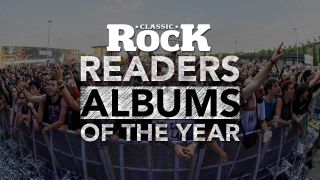 Last week we revealed 50 best albums of 2018, as selected by Classic Rock Magazine's staff and writers. Then we put those choices in a poll, encouraged our readers and social media followers to choose their favourite albums of the year (you could add their own choice if it didn't appear in the original list), and the results, as they say, are in.

It turns out we're pretty much on the same page. Of the 30 top readers' choices, only one album (Magnum's Lost On The Road To Eternity) didn't appear in our original list, but it's at the top of the chart that it gets really interesting.

The album we chose as our favourite – Clutch's magnificent Book Of Bad Decisions – came in fifth, while the rest of the top five features a band who've only just released their debut album, a band who've put out more than 20 in total, and someone who resurfaced with their first album in over two decades.

Who can it be? Either way, you'll have to click through to find out. And either way, it shows that 2018 was a good year for youth as well as a lively one for the old guard.

We said: "It would be easy for FM to coast, to make an acceptable album with little effort. But while there are others of their vintage who’d do exactly that, FM have risen to the challenge and made one of the best albums of their career. Moreover, they’ve done it by pushing themselves on all fronts."

We said: "The countrified R&B of Slow Your Rollcarries echoes of Chris Stapleton, as does Weed, Whiskey And Willie. And while they tend to over-rely on Nashville’s standard lyrical tropes, the Osbornes excel on harder-rocking tunes like Shoot Me Straight, which morphs into a dazzling showcase for John’s guitar mastery."

We said: "From the opening cover of Gilly Stillwater’s (that’s Mrs Billy Gibbons to you and me) Missin’ Yo’ Kissin, he sets out his musical stall early. The low-slung vocals sound like an out-take from sessions for La Grange, his guitar offsets his gruff vocal tone with a range of beautiful, high keening notes and we’re hitting the ground running. It’s an ecstatic celebration of blues and rock’n’roll, as on the rangy cover of Muddy Waters’s Rollin’ And Tumblin’."

27. Orange Goblin: The Wolf Bites Back

We said: "Many of the songs on The Wolf Bites Back sprawl and expand out in different directions and with various styles: in particular, Ghosts Of The Primitives is full of 70s-style funk, bolshy, classic Goblin riffs and finally a kaleidoscopic outro. Then there’s the sweeping instrumental In Bocca Al Lupo, which acts as a mesmerising psychedelic centrepiece to the album."

26. Ginger Wildheart: Ghost In The Tanglewood

We said: "With profits going to The Samaritans, Ghost In The Tanglewood should be applauded on principle. But this music needs no sympathy vote; these are joyous, beautiful, vulnerable songs that can soundtrack only good things. Paying It Forward, decorated with swells of slide guitar, is a rousing gee-up, and when Golden Tears’ lusty shanty demands that we ‘build your courage from the cauldron of these molten tears’, only the flint-hearted would sneer at the hard-won sentiment."

25. Magnum: Lost On The Road To Eternity

We said: "Yes, these 11 songs could have been released in 1987 as easily as in 2017, but who cares, when Peaches And Cream has a chorus so instant it’s an ear worm before it’s even finished, and the Smoke On The Water-style riff of Storm Baby is impossible to resist."

We said: "In fairness, Frehley isn’t exactly painting the ceiling of the Sistine Chapel with these late-period solo releases. Apart from Quantum Flux, the album’s impressive prog-instrumental finale, Spaceman is route-one, no-frills, knock-it-out-andfuck-off-home rock’n’roll – and that’s (usually) no criticism. When Ace’s hooks, riffs and solos are on the money, he can still give you the old shivers."

We said: "Saxon have long had their own sound, and this flows confidently throughout the album. However, there’s also an edge here born from a sense of purpose and desire within the band. You can sense the fires being stoked from the opening chords of this album right through to its chugging finale."

We said: "Over the past few years, people have predicted that Monster Truck are one of the rising stars of a new era of southern style rock. Guess what? With True Rockers, the Canadians’ third album, they’ve bloody well risen! As soon as the title track opens up with a salvo of riffs which stink of petrol fumes, you know this is an album that’s going to be cranked into the red zone."

21. Idles: Joy As An Act Of Resistance

We said: "Lead-off single Danny Nedelko is a celebration of the support that can be found within communities, which owes a debt to Sham 69 with its raucous football chant chorus. Never Fight A Man With A Perm, Gram Rock and Samaritans each challenge suffocating stereotypes of modern masculinity, set to a soundtrack of taught, infectious post-punk."