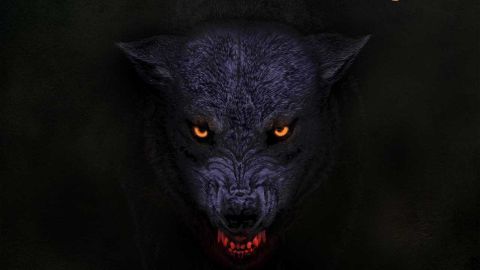 Orange Goblin - The Wolf Bites Back.

Orange Goblin’s trademark sound of fuzzy stoner rock – as rough and raucous as Motörhead and as party hard as Monster Magnet – has placed the much-loved, unpretentious London lads on the top tier of the UK underground stoner scene for over two decades. Though it’s no doubt a coveted spot, you imagine it must still be a bit discouraging never managing to elevate beyond that – doom and stoner aren’t exactly genres that will have you headlining arenas.

Their 2012 uber-catchy anthems album A Eulogy For The Damned saw them flirt with the mainstream, but it seems the pull back to the underground was just too strong. Their new ninth album The Wolf Bites Back is Orange Goblin at their rowdy best – rumbling in at full force immediately with the gritty opening anthem Sons Of Salem – but there’s a greater level of depth to their sound on this album than before.

Frontman Ben Ward has described an interesting range of influences behind The Wolf Bites Back. As well as the usual Black Sabbath and Motörhead worship, he namechecks The Stooges, Krautrockers Can, psych-proggers Captain Beyond and Brit rockers Wishbone Ash. Orange Goblin haven’t gone Krautrock or prog just yet, but you can hear that in taking on more diverse influences, they have managed to develop their sound in an exciting way.

The album is heavy on the riff – roaring party anthem Renegade shakes with groovy stoner guitars, while Swords Of Fire is slow, weighty doom before Ward’s now instantly recognisable gruff and gravelly vocals come elbowing in to speed it up.

In fact, many of the songs on The Wolf Bites Back sprawl and expand out in different directions and with various styles: in particular, Ghosts Of The Primitives is full of 70s-style funk, bolshy, classic Goblin riffs and finally a kaleidoscopic outro. Then there’s the sweeping instrumental In Bocca Al Lupo, which acts as a mesmerising psychedelic centrepiece to the album.

The wild, grinding hardcore of Suicide Divsion sees Goblin embracing their inner punks, while on dark blues ditty The Stranger they slow down for a dalliance with the Deep South, with Ward showing off his vocal variety.