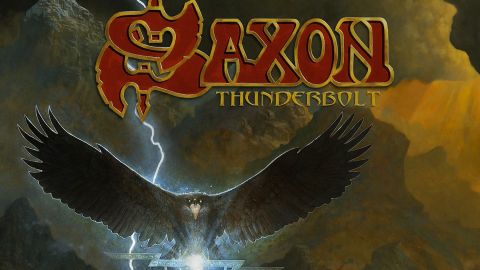 There have been times in the past decade when Saxon have threatened to burst out with music worthy of being compared favourably to their early-80s glory albums such as Wheels Of Steel. And now they’ve gone and done that with new album Thunderbolt.

After skirting round the edges with their previous two albums under the watchful eye of producer Andy Sneap, this time the partnership truly blossoms. It’s not that there’s a feeling of both parties being comfortable with one another here, it’s actually more the opposite. Sneap, renowned for being no respecter of reputations and for pushing his charges harder than most, does precisely this, and is met with a band clearly in tune with his ambitions on their behalf.

While Olympus Rising serves as a portentous instrumental intro, the title track serves up a storming serenade of stark riffage, coupled to Biff Byford’s unshakable vocal prowess. And there’s little respite, with Paul Quinn and Doug Scarratt trading guitar blows on The Secret Of Flight, and Nosferatu (The Vampires Waltz) has a dark menace.

They Played Rock And Roll is Saxon’s tribute to their old pals Motörhead, and Lemmy in particular. Appropriately, it has the feel for the type of groove that Motörhead used to deliver in spades. And keeping things a little personal, Roadie’s Song has Saxon paying respect to their own crew, reflecting what Motörhead did with (We Are) The Road Crew. Elsewhere, drawing on past triumphs, Speed Merchants has the smell of petrol and burning rubber and comes across like a successor to Stallions Of The Highway.

What Biff and co. do throughout is display a diversity when it comes to inspiration. While some songs are clearly enveloped in personal experiences, mythology and history are to the fore on Sons Of Odin and A Wizard’s Tale, and there’s a definite atmosphere of modern-day warfare that runs through the scarred rhythms of Sniper.

Saxon have long had their own sound, and this flows confidently throughout the album. However, there’s also an edge here born from a sense of purpose and desire within the band. You can sense the fires being stoked from the opening chords of this album right through to its chugging finale. On recent albums, the band have been searching keenly for the songs and the performances which would demonstrate that they are still capable of completely kicking away any signs of Saxon being weighed down by their history. On this album it has happened.