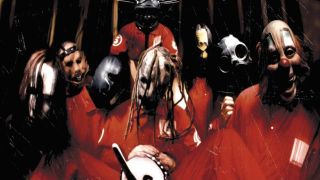 As any boiler-suit wearing maggot will tell you, today is the 19th anniversary of Slipknot’s self-titled debut album. In this 21st century music world we live in, metal bands having a 19 year lifespan and still remaining relevant is no easy task but the Knot have done so with relative ease. And they have this record to thank for it…

At the time, nu metal was still in its relative infancy. Yes, Korn and Deftones were doing their thing, but Linkin Park and Limp Bizkit had yet to go supernova as their breakthroughs wouldn’t be released until 2000. Slipknot were ahead of the game in that respect, and to be fair, didn’t buy in to the nu metal aesthetic as much as their spiky-haired, baggy trousered peers.

And unlike Bizkit and Linkin Park, the Des Moines nine weren’t exactly radio-friendly – but that didn’t matter. Such was the nature of the abrasive music and their twisted appearance, they set out to be hated. From the album cover shot in a garage of nine sinister faces staring emotionlessly back at you, to the inner sleeve with the unforgettable “Come play dying” scrawled underneath the band, to the warped words of “The whole thing I think is sick” repeated on 742617000027, this was orchestrated venom.

Before parents and tabloids were spitting out their morning coffee over popstars smoking a little bit of weed, these nine masked psychopaths were scaring entire generations of kids and exciting millions at the same time – including yours truly. Seeing the music video for Wait And Bleed for the first time on MTV2 will stick with me as the turning point to seriously ‘getting into’ metal.

Slipknot were suddenly at the forefront of something real that they had created. They publicly shunned their counterparts on the ‘poppier’ end of the spectrum and did things their way – from fighting on stage to huffing on the stench of dead crows to induce vomiting. It was this no fucks given attitude that meant they seemingly had complete freedom musically and creatively to make Slipknot more than just characters on a stage or voices on a CD… Slipknot was a living, breathing organism that wanted to consume you.

It’s not even that the album was accessible. You had nine men making as much fucking noise as humanly possible. Nowadays you can have a number one album from the comfort of your bedroom with a laptop, but this was a gang of very pissed off individuals letting all their rage spill out onto the recording studio floor to be mopped up by Ross Robinson. The punishing percussion from three men hurling all they could into drums, kegs and everything else. The hyper-distortion and engine revving guitars sent hearts into spasm and Craig Jones’ sampling skills sound like one of Stephen King’s nightmares. Try listening to the intro for Tattered & Torn without visualising something unforgivable. Prosthetics too is the aural equivalent of falling down a rabbit hole dug by Ted Bundy.

Of course nowadays the fans that grew up locked inside the dark and twisted cage Slipknot created are the ones we’re watching on stage at the festivals we went to as kids. Everyone from Avenged Sevenfold and Bring Me The Horizon to Code Orange and Employed To Serve and countless others are living proof that one record can change the scope of a generation. If those bands had found solace in something slightly less aggressive, slightly less energetic, slightly less fucked up then the line-ups of Download and Hellfest would be totally different. And we can thank Slipknot’s 1999 debut for that. Yes, Iowa was darker. Yes, Vol.3 was more accessible. But the self-titled needed to happen as much for the band and the fans. Now we just hope the upcoming sixth album can hold a candle to the legacy the Knot created. Give me a scream, Corey…