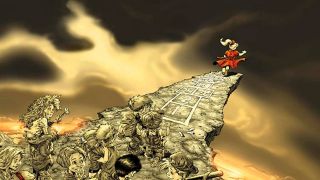 Freak On A Leash

Dirty casuals may lump Korn in with the dregs of nu metal, but the Bakersfield bruisers have always been a forward-thinking bunch, sitting with the likes of Faith No More and Rage Against The Machine when it comes to unpredictability. This boils down to their visuals, too; through 22 years, Korn have released over 40 – that’s forty – videos. It was a job and a half, but we’ve whittled it down to the top 10 for you. You’re welcome.

Before we touch upon the gnarlier crevices of Korn, let’s first visit the fun bit: Word Up!’s video, a clip that basically plays out like Vince Gilligan stumbling home after a heavy one, aimlessly Face Swapping Korn with some dogs. Dropping before See You On The Other Side, this Cameo cover and its accompanying shoot bridged the gap between old Korn and the speed-dial party band we know today. Also, don’t watch it until the end: Fieldy as a dog in a strip club, flashing the grin of broken promises, is one of the most haunting, perverse images you’ll view in your life.

Bit of role reversal here as vocalist and ex-mortician Jonathan Davis is laid on the slab – in some rather racy pants, lest we forget – alongside his bandmates. There’s a CSI­-style intro where the band are found dead inside a car and then they’re all wriggling about in their coffins to the bass-heavy racket of A.D.I.D.A.S., dolled up in wonderfully sterile face paint. Director Joseph Kahn saw the shoot as a pivotal moment in his career, stating: “When I finally got a rock video like Korn, it was fun to take my slick hip hop sensibility and turn it loose on angry white guys. I guess it shocked people.” Yeah mate. Just a bit.

Told to just pull a ‘hit’ from their arses by the record label, Korn responded by writing Y’All Want A Single. Yes, it’s silly and immature, but the video’s glaring, clearly stated facts more than permit the scenes of destruction within. Maybe it seems tame nowadays, but a major label band calling out the fat cats and plonking it all in one video – especially seeing as, back then, videos were a genuine selling point – was a classic Korn manoeuvre.

Give Korn a lump of money and you get Got The Life, which is a pretty sweet deal, really. The dreadlocked dickheads perform on what appears to be a children’s TV show and let loose in a variety of swanky sports cars; Davis has a paparazzi-induced breakdown in the backseat before going to smash his stalkers with a baseball bat; Fieldy and Head have obviously never seen Ferris Bueller’s Day Off, handing their keys to a valet who proceeds to blow their shiny new car the fuck up. Director McG acknowledged the fact that Korn’s sound and attitude had changed, yet still maintained that grit from the early shoots alongside Got The Life’s cinematic, Michael Bay-esque scope. It was so ridiculously popular that Got The Life was the first video to ever be officially retired from MTV’s Total Request Live, seeing as no other artists were given a chance to get on the telly.

We were promised heavy and Rotting In Vain delivered, harking back to the weirder, artsier concepts the band explored through the Issues and Untouchables period on a visual level as well as sonically. Sons Of Anarchy’s Tommy Flanagan pumps a piss-load of class into the effort, swanning around in a suit, huffing from an oxygen mask and delivering an assortment of brooding facial expressions; Davis saves on his water bill by bathing in leaves and the band rattle through the track in a cabin straight from a horror film with the best soundtrack ever – well, except maybe for Cradle of Fear. A suitably spooky video and another step in the right direction… especially thanks to Fieldy’s hairdresser. What a do he’s got now.

A creepy video for a creepy song, directed by Sean Dack, a fan who won the coveted role through a competition: proof that Korn’s devotees are just as tweaked as the band. For reasons unknown, Davis decides to kill his bandmates. Maybe they objected to his moustache or he was just having a shitty day – who knows? Anyway, he just kills everyone; Munky being electrocuted as he enjoys a relaxing bath is the obvious highlight, while Fieldy’s death by Bolognese clocks in at a strong second.

Aaron ‘Yo, BITCH!’ Paul leads the Thoughtless video and encompasses everything we usually associate with early Korn: the bullied, weirdo kid getting beaten up and finally extracting their revenge, a bit like Carrie but less shit. The band play inside the bullied kid’s brain – we think – surrounded by creepy, ghostly effigies of oppressors and suchlike. The kid gets increasingly angsty, the members of Korn bubbling within his skin like parasites. It culminates with Aaron Paul vomiting what appears to be Rice Pudding all over the jocks at prom, so it all worked out in the end. Once again, Thoughtless’ video proved that even when Korn had enough money to wipe the entire arse of America with, they were still rooting for the underdog and delivering banging music.

Essentially a live video with a few shots of the band looking sullen for added effect, Blind’s promo trail is mandatory viewing for anyone going to a Korn show. That sweaty, untamed pit full of fans you see there, beating the bollocks out of each other as the band play in that tiny club? That’s what any Korn show is and has been like, from inception to present day – at least the first quarter of the crowd, guaranteed, will behave exactly like the headcases in Blind’s video. Dirty, dingy and the absolute epitome of the Korn live experience. “Are you ready?” Davis asks. Yes we are, Jonathan. Yes we are.

Further shedding that vulnerable exterior cultivated on the first few records, Twisted Transistor displays Korn as a band well up for mocking their own legacy and members. Snoop Dogg, Lil Jon, Xzibit and David Banner star as the band in this delightful mockumentary, covering all bases; Lil Jon lays down vocals in a booth surrounded by women and booze, reminiscent of It’s On!’s creative surroundings; Banner does his best David Silveria, posing for the cameras and generally being an all-round hunk; Xzibit just throws up everywhere. The star turn, however, comes from Snoop Dogg. Whether he’s punching toilet roll or abusing a clone of Nardwaur the Human Serviette, Snoop perfectly captures Munky’s Zen attitude – with occasional rock star outbursts, of course – and also provides the video’s greatest soundbite: “This song ain’t about no booty… it’s about transistors. You dig?” Yes.

It’s so predictable – high five, anyone? – but the number one spot wasn’t budging for any other video. The definitive Korn clip for the definitive Korn song, Freak On A Leash is bookended by Todd McFarlane’s gloriously twisted animation; a load of kids are caught trespassing and everything goes tits up when the pursuing policeman trips up, firing a bullet at a girl playing hopscotch. BUT WAIT. She doesn’t die; the bullet travels into the real world, smashing through a smorgasbord of conveniently smashable objects in glorious slow-motion, offering the viewer a glimpse of Davis apparently having a rap battle with the bullet amidst other live footage. A captivating, innovative short that’s worthy of all the awards and praise it’s garnered. A video worthy of Korn.