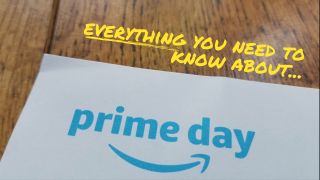 Unbelievably, Amazon Prime Day 2019 has already been and gone. Did you get stuck in and purchase any of the 175 million discounted items that were sold during the 48-hour event? If so, you and your fellow Amazon Prime members saved a whopping $1 billion dollars between you.

To the uninitiated, Prime Day is Amazon's summer version of Black Friday, giving its members massive discounts on just about everything. In previous years, Amazon has delivered exclusive deals on speakers, headphones, vinyl, record players and more.

This year didn't disappoint either. Some of the best deals for music fans were had on Bose headphones and Marshall speakers, but there were bargains to be found on everything from Led Zeppelin and Guns N' Roses vinyl boxsets to D'Angelico and Fender guitars. iPad Pros and whiskies from top brands including Talisker and Wild Turkey were in the mix, too.

With Amazon Prime Day 2020 set to be even bigger, we're hoping to see even more price-slashing love for music fans. Stay tuned to this page for all the latest news and the best deals as they happen.

Want to see what you missed on Prime Day 2019? We've rounded up our favourite deals from the event.

Bon Jovi – The Albums vinyl boxset
Was £189.46, now £135.69
This 24 LP box set features all of Bon Jovi’s studio albums remastered on 180-gram heavyweight vinyl. In the set are all of the band’s studio albums, including 6 albums available on vinyl for the very first time plus an ‘Extras’ bonus discs featuring rare b-sides from Bon Jovi’s international single releases and both Jon Bon Jovi's solo records.

Marshall Monitor Headphones: was $249, now $129.99
Yes, they're bluetooth, and yes, they'll give you 30 hours of playtime before you need to recharge, but the main reason to buy these is because you'll look like you have a couple of Marshall stacks clamped to your skull, and that's priceless. View Deal

Marshall Kilburn Bluetooth Speaker: was $299.99, now $184
This portable, lightweight speaker is ideal for life on the go. With two 3/4" domed tweeters and a meaty 4" woofer, there's nothing lightweight about the sound.View Deal

Bose SoundLink Wireless Headphones:
Was $229.95, now $159.00
The ultimate in airport fashion, these bad boys from Bose remain the travellers's favourite, and at this price they're an absolute steal. They're comfortable, they're robust, and they cancel noise better than most.
View Deal

Bang & Olufsen Beoplay H9i Headphones
Was £450, now £225
The H9is are an updated version of the Beoplay H9s, which impressed TechRadar with their battery life and luxurious design – and the new limited edition H9is look to be even more luxurious, with a travel-inspired design.View Deal

Ultimate Ears WONDERBOOM Bluetooth Speaker
Was £169.99 now £99
Control your tunes via Alexa and blast out 360-degrees of rich audio. And if you're not a fan of black (really?) you can pick one up in yellow, green, blue or white for the same price.View Deal

SONOS PLAY:1 wireless speaker: was £149, now £124
PLAY:1 offers a surprisingly big sound no matter how tight the spot. A superb quality speaker at a more affordable entry point, Sonos is now becoming an option for more of the UK's households. Also available in white.View Deal

Sony PSHX500.CEK turntable £278.49
Everything about this turntable screams class, from the sturdy tonearm for accurate tracking, to the ability to record your vinyl as high-res audio. It supports phono and line output, too.View Deal

Save 30% off 106 D'Angelico electric and acoustic guitars
Was this the best Amazon Prime Day deal this year? D'Angelico was offering massive discounts off a colossal range of electric, acoustic and bass guitars!View Deal

Save $330 on Fender’s PM-TE travel acoustic guitar
An almighty 47% discount made this one of the very best acoustic guitar deals this year. Fender's top-spec travel guitar boasts a solid Sitka spruce top and solid mahogany back and sides, plus a Fender/Fishman-designed preamp - and hardcase!View Deal

GoPro HERO 7 Black action cam. Was $399.99, now $343.00
On Prime Day you could have saved $57 on the king of action cameras - the ideal way to film your band's live performances, stream your own playing directly to Facebook Live, or record your practice.View Deal

Jack Daniel's 150th Anniversary edition, 1 Litre
Was £149.99, now £79.99
A celebratory bottling of Jack Daniel's Tennessee Whisky, produced in commemoration of the distillery's 150th anniversary. Perfect for the bourbon aficionado, the 150th edition has a deep orange amber colour and nose it has a balanced caramel, vanilla and toasted oak taste. This whisky is presented in a black cardboard gift box. View Deal