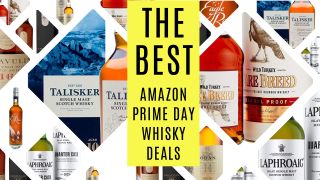 Amazon Prime Day is here and it's not just about snapping up bargainous headphones and speakers that talk back. No! There's booze too. We asked Scottish whisky blogger and Louder News Editor Scott Munro (aka The Kilted Moose) which of the Prime Day whisky bargains he'd buy. He chose three single malts and three American whiskies. Here's his selection.

Lagavulin 16 year old: was £54.66, now £39.50
Produced on the Isle of Islay since 1816, Lagavulin is now enjoyed all over the world. Says Scott: "This smoky single malt from one of Islay’s best-loved distilleries is a great introduction to peated whisky and an enjoyable dram for maltheads across the world."View Deal

Oban 14 year old: was £47.99, now £38.99
Distilled in the Scottish Highlands since 1794. "This delicious drop from Scotland’s west coast carries a slight hint of smoke," says Scott, "but it’s the honey, fruit and toffee characteristics which make this one a classic."

Talisker 10 year old: was £44.00, now £27.99
"One of only two distilleries on the isle of Skye, Talisker has been around since 1825 and the 10 year old remains a firm favourite," says Scott. "The sweet fruit here is balanced by hints of salt, pepper and ginger." A classic Island whisky from the oldest distillery on Skye.

Jack Daniel's Gentleman Jack: was £36.00, now £18.99
Almost 50% off this upmarket JD. "While Jack Daniel’s Old No.7 might be more iconic," says Scott, "don’t miss this premium version of the famous Tennessee whiskey. It’s more robust than what we’ve come to expect from the distillery and, as a result, this has more depth of flavour."

Eagle Rare: was £36.00, now £27.99
Produced at The Buffalo Trace Distillery, the longest continuously-run distillery in the US, established at the end of the 1700s. "This 10 year old bourbon comes from Buffalo Trace," says Scott, "but unlike their standard offering at 40%, the Eagle Rare weighs in a more respectable 45%. It’s nutty, has some citrus notes and is packed with cinnamon and vanilla flavours."View Deal

Wild Turkey Rare Breed: was £49.99, now £36.99
"The 81 and 101 bourbons from Wild Turkey are decent enough," says Scott, "but the Rare Breed is bottled at cask strength which elevates it above the others. Caramel, chocolate and brown sugar notes are to the fore and this is perfect with a drop of water or a chunk of ice on a hot day."