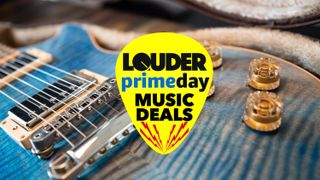 Well, there's no better time to buy a new instrument than Amazon Prime Day 2019. It's started now and is bound to throw up a load of great deals for musicians.

To take part in Prime Day, you'll need an Amazon Prime account. Right now the best offer is £59 for a year in the UK (£20 off the usual price of £79) to take advantage of all the deals and discounts across Amazon over the next two days.

Save 30% off 106 D'Angelico electric and acoustic guitars
Could this be the best Amazon Prime Day deal this year? Get massive discounts off a colossal range of electric, acoustic and bass guitars now!View Deal

Save $330 on Fender’s PM-TE travel acoustic guitar
An almighty 47% discount makes this one of the very best acoustic guitar deals this year. Fender's top-spec travel guitar boasts a solid Sitka spruce top and solid mahogany back and sides, plus a Fender/Fishman-designed preamp - and hardcase!View Deal

Learn to play with the Jamstik+. Was $299.99, now $199.02
The Jamstik+ is a great entry point to learning the guitar. It feels great to play and connects via Bluetooth to a huge selection of fantastic tutorials and apps.
View Deal

Learn to play guitar for less with 50% off Fender Play
The Fender Play learning platform is one of the easiest and most affordable ways to learn to play guitar - and it just got even cheaper: you can now get 50% off an annual plan, which brings the monthly price down to just $4.99/£4.79.View Deal

Ernie Ball Slinky Nickel Wound Sets (3 Pack)
You can never have too many sets of strings, and now's the time to stock up, with a whopping 62% off a three-pack of Ernie Ball Slinky strings.View Deal

Keep your guitar, bass or uke in perfect tuning with this simple, fast and accurate clip-on tuner. The screen is super bright making it ideal for stage use too.View Deal

RockJam Mesh Head Kit: Save 25% and grab this e-kit for $202 at amazon.com
Four mesh heads for a shade over $200 is outrageously good value, so if you're in the market for your first electronic kit, you have to check out this deal.View Deal

PureSound Custom Pro Snare Wires. Was $21.05, now $15.35
Treat your 14" snare drum to some crisp new steel wires and enjoy a fatter, fuller sound with loads of crack. Built-in features help reduce unwanted buzz and produce consistent tension along the full length of the wires. This deal ends at 07.45am on July 15.View Deal

Blue Yeti USB Microphone: was £119.00, now £79.99
Blue's Yeti mics have been the go-to USB mic for podcasts and anyone who wants to record straight to their computer. Perfect for podcasting, recording voice for YouTube, game streaming on Twitch, Skype calls, music and more – now 33% off.View Deal

Focusrite Scarlett 2i4 Audio Interface: , now £108.99
This second gen model of Focusrite's popular Scarlett USB audio interface series is a belter. It features two instrument inputs enabling you to recording anything from bass and guitar to vocals. The bundle also include a copy of Pro Tools | First to get you up and running quickly.View Deal

AKG K271 Over Ear Headphones: were £87.00, now £54.99
Pro-standard headphones at a bargain price. The K271s were £140 when they first came out and picked up positive reviews from the likes of audiophile mag Sound On Sound.Powerful, with a rich and detailed sound, they're serious headphones that will block out the world, keep the sound in, and last a long time too (their cable is replaceable).View Deal

AKG K92 High Performance Headphones: , now £27.50
A pair of 5 star headphones at an unbeatable price. Our sister mag What Hi-fi gave the K92s 100%, claiming "AKG has struck gold – the K92s might just be the best value headphones we've heard in years," adding: "If you’re mostly going to be listening to your music at home, and just want a great-sounding, comfortable pair of cans to hook up to your laptop or hi-fi, then the K92s will suit you perfectly."View Deal

Jack Daniel's Guitar Case Gift Pack: was £40.99, now £34.99
Yep. It's a bottle of Jack Daniel's in a guitar case, with a metal headstock bottle stopper. It's fun, it's weirdly cute and it'll make you paralytic. The perfect gift for the bourbon-sipping guitar hero in your life.

Jack Daniel's 150th Anniversary edition: now £79.99
A celebratory bottling of Jack Daniel's Tennessee Whisky, produced in commemoration of the distillery's 150th anniversary. Perfect for the bourbon aficionado, the 150th edition has a deep orange amber colour and nose it has a balanced caramel, vanilla and toasted oak taste. This whisky is presented in a black cardboard gift box. The original retail price was £149.99.View Deal