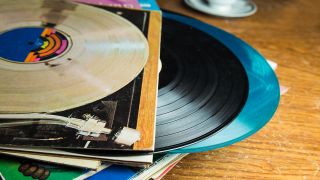 Sure, streaming has its place in the modern world. But the experience of the physical format is totally inimitable – the rustling of the sleeve, the feel of it in your hands, the crackle of static as the needle drops on a dusty 45.

Even the smell of an old record plucked from a charity shop crate speaks of its history; decades spent stacked in a musty, smoke-filled apartment, stains of Jack and Coke (and God knows what else) on the sleeve. You could never hope to get that experience from a digital stream – and, okay, maybe on that last point it's not such a bad thing.

When hyping the physical format, defenders often turn to supreme sound quality and the artwork as its greatest assets. But one of the physical format's most under-appreciated aspects is the carefully-considered liner notes, as an entirely distinct entity from the visual art. For many, it's an equally vital part of the personal discovery of a record, whether on vinyl, CD or cassette.

On the face of it, liner notes might seem inherently uninspiring: a dry list of production credits and acknowledgements – a necessary yet dull obligation. But the best examples provide unique personal insights into the artist's character and approach that you might not get from the music alone.

In the commentary accompanying his Greatest Hits, Bruce Springsteen reveals he was doing his best Roy Orbison impression on Thunder Road and that Born To Run was his stab at writing the greatest rock and roll record ever (not a bad effort). Robin Pecknold used Fleet Foxes' debut to share philosophical musings on life, while surrealist Robyn Hitchcock often shares his wonderfully abstract stories. Pearl Jam fans praise the band's personalised handwritten notes, and Stevie Wonder has even provided his liner notes in braille.

Sometimes, a famous fan is roped in to wax lyrical on the group. Diehard Ramones fan and horror legend Stephen King begrudgingly wrote the liner notes for the Ramones tribute record, because, by his own admission, Rob Zombie told him to, and you “never say no to man called Zombie”.

Crucially though, liner notes sate the curiosity of those who crave every last intricate detail surrounding the making of a record. Those who won't rest until they find out who was making tea, what brand of batteries were used in the guitarist's fuzzbox, where the album was mastered, and who plays the oboe interlude on track seven.

It's amazing what discoveries can be gleaned from a close reading of the small print. Approach it as a detective would a crime scene and you might well discover inter-band riffs, high-profile lawsuits, discarded lyrics and even hidden cameos from unlikely sources. Was that really Johnny Depp playing slide guitar on Be Here Now?

Even an anodyne acknowledgement for the use of a sample can be revealing. “The band would like to thank [insert band name here] for their kind use of the sample, which was previously used without permission.” In other words, “We've just had our wrist slapped via a sternly-worded letter on expensive headed paper from a copyright lawyer.” It happens a lot, and it's all there in the liner notes.

Disputes over who actually wrote the song manifest themselves when a string of additional names get added to a re-release of a hit record. The later inclusion of Jagger/Richards to the Verve's biggest hit, Bitter Sweet Symphony is well-documented, but maybe less so the recognition of Clare Torry on Pink Floyd's The Great Gig in the Sky, whose vocal ad-libbing was later deemed an integral part of the song's composition.

You might discover that the act that masquerades as a band is essentially a solo project in disguise (Metronomy, Tame Impala, and – on some of their later albums – Smashing Pumpkins). Or conversely, that a so-called singular talent has an army of writers propping them up.

Imagine discovering that you inadvertently performed on one of the greatest records of all time. Nirvana's previous drummer Chad Channing played on some early demos for Nevermind before being replaced by Dave Grohl. An eagle-eyed comparison between the original credits versus those on Deluxe edition some 20 years later highlights that Channing's version of Polly actually made it onto the record – a fact even he wasn't aware of.

Liner notes have a more practical benefit to the fans too. Seeing which bands have been name-checked as tour buddies in the list of acknowledgements has traditionally been a great way to discover new music. At one point, liner notes were essentially the analogue equivalent of the algorithms on Amazon and Spotify that now do all the thinking for you: “If you like X, then you'll love Y.”

Finally, credits aside, the final piece of the puzzle is the printed lyrics, helping to settle that mispronounced line once and for all. Anthony Kiedis' handwritten lyrics for Knock Me Down from 1989's Mother's Milk include a lost verse, cut from the final recording. A particularly poignant example, being a tribute to his recently departed bandmate, Hillel Slovak. Some groups go the whole hog by providing the chords so you can play along.

Ok, so everything you need to know is all on Wikipedia these days. But nothing beats ruffling through the booklet firsthand, squinting at the minuscule font size to make the discoveries all on your own.