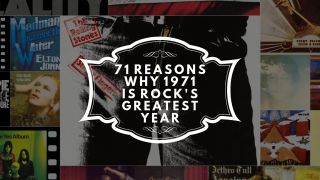 David Hepworth makes a case for ‘71 as rock’s golden year.

1) The Beatles broke up on the last day of 1970, laving a vacant crown. As Richard Perry said when he went into the studio with Harry Nilsson, “I wanted to be his George Martin and he was going to be my Beatles”.

4) Elton John’s Madman Across The Water.

7) Nick Drake released Bryter Layter in March. In November he dropped off the tapes of the follow-up Pink Moon at his record company and never recorded again.

8) Many acts were on two albums a year contracts, which meant they were extra productive at their most creative age. In 1971 Yes produced The Yes Album and Fragile, Paul McCartney did Ram and Wildlife while The Faces did two of their own and also played on Rod Stewart’s breakthrough.

9) Carole King’s Tapestry came out in February to no fanfare whatsoever. By the end of the year it was selling 150,000 copies a week.

10) It was the era of maximum mystique. David Bowie, on his first visit to the States in February, talked his way backstage at a Velvet Underground gig and fawned over the singer, who he thought was Lou Reed. It was actually Doug Yule. Lou Reed had left the band.

11) The Move’s last album Message From The Country.

12) The Electric Light Orchestra’s first album, which was released in the USA under the title No Answer when the record company couldn’t get through to anyone to confirm the name.

13) In 1971 record sales were growing too fast for the record companies to exert any kind of meaningful control.

14) Marvin Gaye released the single of What’s Going On. Motown boss Berry Gordy called it “the worst piece of crap I ever heard”. It sold millions.

15) Peter Grant told Atlantic the new Led Zeppelin album wouldn’t have a title, an artist credit or a picture of the band. It sold millions.

16) In March Tony Iommi detuned his guitar to D flat while making Master Of Reality, to save the wear and tear on his injured finger. This became the signature sound of metal. It sold millions.

17) Emerson Lake And Palmer were broken nationally via their budget-priced live album Pictures At An Exhibition.

19) There were only three British TV channels but four music papers.

20) Bob Marley was shivering in Sweden where he was working with Johnny Nash and Rabbit Bundrick on the soundtrack for a film.

21) In the USA the TV show Soul Train went national - in colour.

22) After seeing the flames from the Montreux Casino, which was burning during a a Frank Zappa concert Deep Purple wrote Smoke On The Water.

23) Everybody played live all the time. Neil Young wrote and recorded Harvest in locations as far apart as Barking, east London and Nashville while he was on the road in 1971. The classic T. Rex singles were recorded at stops on their 1971 American tour. Pink Floyd spent weekdays recording Meddle and weekends playing colleges. Nobody took months off. Nobody dared.

24) Genuine strangeness was piped into British living rooms in autumn when Alice Cooper appeared on an early edition of the Old Grey Whistle Test.

26) Sticky Fingers, the first album under the distinctive tongue logo of their own label, was almost as notable for its cover as its content.

32) 1971 was the year Status Quo stopped trying to get back to psychedelic pop and embraced the boogie.

33) Stevie Wonder started working with Tonto’s Expanding Head Band, with whom he would make Music Of My Mind, Talking Book and all his classics.

34) There wasn’t an alternative scene. Sly and The Family Stone’s There’s A Riot Going On wasn’t merely the strangest, most disquieting album of the year. It was also the Christmas number one.

35) The Who were at the top of their game. When they started recorded in the Record Plant in New York their manager held up a sign to the window. It read simply “don’t stop”.

41) With the first album from Osibisa, “world music” was marketed at the rock audience for the first time.

42) Dub reggae was “Top Of The Pops” with Dave and Ansell Collins’ Double Barrel.

43) Unaccompanied hymns were also at number one via Judy Collins’ Amazing Grace.

45) In Boston the Modern Lovers made a demo of Roadrunner while in London Roxy Music were working out Virginia Plain.

46) David Bowie released The Man Who Sold The World in the UK, recorded and released Hunky Dory and recorded all but one track of Ziggy Stardust in the year 1971. If all we knew of Bowie was what he did in 1971 we would know a lot.

47) Rick Wakeman played the piano glissando at the start of T. Rex’s Get It On, the intro to Cat Stevens’ Morning Has Broken and the solo on Yes’s Roundabout.

50) George Harrison’s All Things Must Pass.

52) Pop music was just beginning to look back to the 50s. The first production of Grease opened in Chicago. Don Mclean released a song called American Pie.

53) The term “kraut rock” was used for the first time to market albums by Can, Amon Duul and Kraftwerk.

54) The marriage of Mick and Bianca and the pairing of James Taylor and Carly Simon gave birth to rock high society and inspired the writing of You’re So Vain.

57) The House On The Hill by Audience.

61) The Concert for Bangla Desh laid down the template for the rock charity spectacular. The rules remain unchanged. You have to have Dylan or a Fab. Preferably both.

62) When Linda Ronstadt played Disneyland in spring 1971 (with two members of the Eagles in her backing band) the contract stipulated she had to wear a bra.

63) The Allman Brothers Band made their epic live album At Fillmore East despite Tom Dowd firing the horn section on the first night.

64) Glyn Johns sat down with Pete Townshend and advised him to ditch plans for a Lifehouse double album and make a belting single album instead. Thanks, Glyn Johns.

65) Artists shared their best material. Carole King let James Taylor have You’ve Got A Friend, Jackson Browne gave Take It Easy to Glenn Frey before it was even finished.

66) The death of Jim Morrison proved that this need not be the end of a career.

67) Rock’s Rich Tapestry wasn’t yet complete. When Joni Mitchell made Blue nobody had yet made Joni Mitchell’s Blue.

68) Everybody in rock had hair. Nobody was overweight.

71) One minute and six seconds into track one of Who’s Next, rock peaked. Have a listen. It might not have been the beginning of the end; it was certainly the end of the beginning.

1971: Never A Dull Moment by David Hepworth, the story of rock’s golden year, is published in the UK by Bantam Press. It’s available to order now, and was released in the US in June.