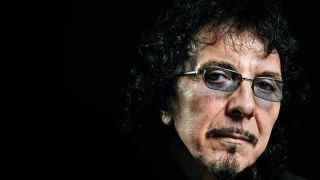 He’s the proud Brummie who plays songs about the devil but has guardian angels. He’s had success and fame beyond most people’s wildest dreams with Black Sabbath, selling millions of albums and playing to millions of fans with a band who are one of the founding father of heavy metal, and setbacks that are the stuff of nightmares, including being diagnosed with cancer. He is also truly a legend.

Always believe in the impossible

I lost the tips of two fingers in an accident on the day that I was due to leave my job in a sheet metal factory to turn professional. I was only seventeen years old, and the doctors told me there was no point in trying to continue playing the guitar. But I wouldn’t give up and eventually I found a way. All through my life I’ve had that same attitude. If band members left, then I never gave up. You find somebody else and you carry on. And eventually of course we all came back together.

I’ve no idea where those riffs come from

I’m just grateful that they do. They come out of the air; I don’t sit down and work them out. They just arrive. It’s all very strange. I can sit down and two or three different riffs will come along in ten minutes. Some of them will be crap but most are usable. I’m useless at most other things, but if there’s one thing I can do in life then it’s write riffs.

The last Sabbath show was weird

The feeling built as we crept towards to the final gig at the Genting Arena, but it didn’t really sink in ‘til the day of the show. Looking out at the audience during the last few songs, people were crying. Those people idolise you and love what you do. In a way it felt like we were letting them down. It was a shame.

How we got from those days to what the band eventually became, I’m really not sure. We would play places where nobody was interested. Or we’d turn up and people would think that we were playing pop, when of course we weren’t. I recall a gig at a place called the Toe Bar in Egremont and this bloke shouted out: “Your singer’s crap.” That was really embarrassing. Of course, we improved as the years went by, but we certainly had to teach people – and ourselves – about what we were doing, because it was so different. It was a very steep learning curve.

Has anyone got the Black Zeppelin tape?

We were really good mates with Led Zeppelin, especially Robert Plant and John Bonham who came from the Midlands. Zeppelin had wanted us to be on their label, Swan Song, but we couldn’t make it work out. During the recording of the Sabbath Bloody Sabbath album [1973], Zeppelin came into the studio for a jam. John wanted to play Supernaut [from the previous year’s Vol 4] but we jammed instead. We were in the middle of recording so it fucked up the session. I know that it was recorded, and I’d love to hear it. The tape must be around somewhere.

At school I was caned – a lot. For me it was a mistake to do away with all of that, because levels of discipline are suffering. If you do wrong, then you should be punished. It’s how we develop our morals. Now there’s almost no difference between right and wrong.

It wasn’t just me, all of us saw the one at Clearwell Castle [in Gloucestershire]. Sabbath had hired the place out so there was nobody else there. We were rehearsing in the dungeons. Coming up the stairs we saw this figure go into the armoury. Ozzy and I asked: “Who’s that?” We went into the armoury and nobody was there. But the room had just one door and no windows. We looked everywhere, including under the table in case someone was winding us up, but there was nobody. It was all very peculiar.

I believe in God – of sorts

That statement may be a shock, given the subject matter of so many of Black Sabbath’s songs, but I believe in a god – whatever god it is. I definitely believe in angels, because three of them saved my life when I was in my late teens. I’d just passed my driving test and was in my sports car driving on a dual carriageway. I had just overtaken another car when two tyres blew out. I went off the road, the MG flipped over and I hit a tree. I passed out, and when I awoke I smelled petrol but I managed to get out, and as I did so I saw those angels. To this day I really believe they were there; I wasn’t stoned. It’s been said that they saved me for a purpose, because I went on to invent heavy metal. And you know what? I quite like that idea.

The body is just a vessel

When I was much, much younger I used to astrally project. I got really into it. The first time I left my body it was quite frightening. I jumped straight back in again. The best time to do it was just before you go off to sleep. I used to do it a lot – hover about my body, looking down at myself. I tried it again some years later and was quite disappointed to find that I was no longer able.

At the end of the 1980s, Sabbath made some music that I consider good, including The Eternal Idol [1987] and Headless Cross [’89], but Forbidden [1995] was really crap. We were pushed into a corner. Somebody at the record company suggested we work with Ice-T. My reaction was: “Who the hell is he?” But we met up and he was a nice bloke, and also a big fan of Sabbath. Ernie C [Body Count guitarist] ended up producing Forbidden, which was a terrible mistake. Ernie tried to get Cozy Powell to play these hip-hop-style drum parts, which, quite rightly, offended him. You don’t tell Cozy Powell how to play drums.

In the 1990s there were a lot of line-up changes and it became hard to drive Sabbath onwards. But I’m very determined – you don’t split up the band just because somebody leaves. Find a replacement. Get on with it. I still believed in the band.

That was the album we made with Ian Gillan [in 1983]. It sounded great in the studio, but there was a problem with pressing. It would be great to fix it up. But you know what? The tapes have disappeared into the Don Arden [former manager] pit. We’ve found about five tracks, the rest are all missing. Such a shame.

Being a part of the Queen’s Jubilee celebrations [in 2002] was very weird but a wonderful experience. After Ozzy and I had played, we were invited to Buckingham Palace for a drink – supposedly for fifteen minutes, but it didn’t turn out like that – and Harry and William complained: “You didn’t play Black Sabbath!” It seems they are big fans. And so was [then-Prime Minister] Tony Blair. While I was talking to him, Ozzy came over to ask me something and didn’t even acknowledge Blair. When I introduced them, Ozzy didn’t even say a word. After he’d gone I had to apologise: “Sorry, Tony. Ozzy’s always like that.”

And it’s true. There are so many examples. My wife and I had lunch with him and Sharon at the Beverly Hills Hotel. These two blokes came over to say hello, and one of them was [actor] David Arquette. And at the top of his voice Ozzy asked: “Who the fuck’s that?” How embarrassing, and funny [laughs], but that’s typical Ozzy. You’ll never change him.

I’m proud to be a Brummie

The place has changed such a lot. Ozzy and I were honoured by the city’s Walk Of Stars [in 2008], but when they asked where I wanted my star to go I didn’t know anywhere. The places I was familiar with had been knocked down, it was a bit embarrassing. In front of the NIA was the best I could think of. But I’m very proud that in a musical sense Sabbath did a lot to put Birmingham on the map. Many years ago you’d tell people you came from Birmingham and they’d ask: “Is that in London?”

I’ve no idea why the place inspires like it does. Sabbath and Priest are from there, also half of Zeppelin. And don’t forget The Move. Maybe it’s something to do with being industry-based, but it’s the birthplace of a wide variety of sounds.

Get yourself checked out

I still miss Ronnie James Dio every day. On tour with Heaven And Hell he complained of pain. Ronnie said: “I’m bloody sure I’ve got cancer.” And he left it too late to it looked at by a doctor. To anybody reading this, if in doubt, do yourself a favour and see a professional right away.

Since my cancer scare I’m a different person

When your life threatens to come to an end, it really, really changes you. I was wondering: “Will I still be here next year?” We had to work around my condition when recording and touring but everyone in the band understood. That’s why touring had to stop. For me it’s always been about the band. I wanted a little time for myself to see friends and just to do other things. On paper I should have time on my hands now, but with this [promoting the The End Of The End concert film] I’m as busy as ever. Offers are pouring in to work with other bands and do whatever might come next. I’m still going to play.

I’ve been mates with Brian May for many years. He came to my house a while ago. He stayed till about midnight. We were still sitting around and talking. Could we do a project together? Well, we’ve discussed it and you never know…

Old age has mellowed me

In my youth I was much more intense. I was headstrong and perhaps I used my fists a bit. But I was put in the position of running the band, which I really didn’t want, and it was a very pressurised situation. Now I’m calm. I don’t think I have anything left to prove.