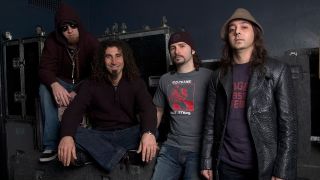 In a year that seems absolutely hell-bent on flushing itself down the shitter, we’ll take any silver lining we can get right now, so the news that a new System Of A Down album is finally on the way is enough to have us pogoing around our living rooms in unbridled, nutty joy. And there’s reason to be genuinely optimistic about this one: whereas Serj, Daron, Shavo and Jon’s uninspired 2011 reunion felt like the epitome of a lazy cash-grab, their live performances in the years since have only got better and better, with a storming showing at Wembley Arena last year showcasing a band very much back on the same page and with fire in their bellies. With that in mind, we have a few humble requests for what we’d like to hear when that long awaited sixth album comes…

This might seem like a no-brainer, but we need to make this absolutely clear: few bands in existence can fill two hours with as many throat-ripping, chest-bursting singalongs as System Of A Down, and there is no excuse for a band that can even make letters sound fucking epic (big ups I-E-A-I-A-I-O) to not deliver the goods. Don’t let us down on this one, System. This is what you do.

System’s legacy has practically transcended itself – look at the stats on their Spotify streams and compare them to the likes of Slipknot and Linkin Park to fully comprehend the level of artist they share a platform with – and yet they’ve never gone the easy way and compromised their sound. Toxicity, their biggest and arguably defining album, featured brilliant, scattershot nonsense like Bounce, Shimmy and X, and Mezmerise and Hypnotize ramped up the Middle Eastern flavours while simultaneously producing some of the most batshit, out of the box music of their career. It might be tempting to tone down their eccentricities for an album that’ll have the world’s ears on it, but that wouldn’t be System. Keep it left-field, keep it nuts.

The best dual vocals to ever hit metal, when Serj and Daron are on the same page, magic appears. Just listen to Holy Mountains and Tentative off the underrated Hypnotize and lose yourself in those melodies. Go on, do it. Relationships within the band have appeared rocky at best over the years, so fingers crossed that the guys haven’t just patched things up, but are (literally) singing from the same hymn sheet. We predict it’ll take about one chorus into the new record to work out if that’s the case.

Whatever your favourite System Of A Down album may be, the fact is that every record they’ve put out has had its own flavour. While that unmistakable mixture of bouncy, nu metal friendly riffs, DEM VOCAL HARMONIES and Middle Eastern influences stayed with them throughout, they progressed enough between each album to never be accused of making a self-titled or Toxicity Part II. Recycling former glories won’t do this time out – we need a vital, current and relevant System Of A Down banging through our speakers.

“POLITICS AND MUSIC SHOULD BE KEPT APAR-” oh do shut the fuck up already. Have you seen what’s going on out there right now? We need loud, politicised bands more than ever, and thankfully there are plenty making great music and educating fans that are worthy of your attention – from Gojira to Enter Shikari to Letlive to Architects to Thy Art Is Murder to Stray From The Path to countless others. And, with Rage Against The Machine currently splintered, who better to produce some modern, rally-cry anthems for a new generation of disenfranchised metal fans than System Of A Fucking Down? Here’s hoping part of the reason they’re even committed to a new album in the first place is because they feel like they have something to say again. Hell knows they’re not short of material.

A potentially controversial ask and, on the face of it at least, something of a hypocritical point given DEM VOCAL HARMONIES, but hear us out. While Hypnotize and especially Mesmerize were cracking albums in their own right, a common criticism is that they saw Daron begin to hog a lot of the vocals for himself. Now, Daron’s a fine singer, as proven by DEM VOCAL HARMONIES, and the dude is, of course, one of the single greatest guitarists of his era. That said, there are a fair few moments on those last two albums where he takes centre stage, and when you’re in a band packing one of metal’s most talented, multifaceted and unique frontmen, it feels a little jarring. So maybe ease off a little? Or don’t. Just be good. Oh, god, please be good…