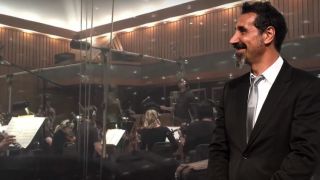 We don’t care whether you can arm-wrestle a bear, lift a tank above your head or just shrug at kittens, there’s something about an orchestra which will grab you by the feelings and squeeze a solitary tear down your otherwise stoic face.

Put your tear ducts to the test by watching this video featuring The Lyra Chamber Orchestra. While drumming up support for Metamorphestra’s Kickstarter project to raise funds for their orchestral covers album, The Ship Of Theseus, arranger Nick Proch seized the chance to work with the Burbank-based orchestra and together, the ensemble worked on an ambitious cover of System Of A Down’s 2001 single Chop Suey!.

“In April, I was fortunate enough to be invited to Capitol Records in Hollywood to record with them,” explains Proch. “I originally intended on recording Chop Suey! with Metamorphestra for our first official album. The opportunity seemed ideal to take advantage of a world-renowned recording studio with world-class players, though, so I decided to record it then instead of waiting for the album.”

So settle back and hear orchestra strip away Chop Suey!’s metallic sheen to reveal a rousing piece which would sit neatly on any James Bond soundtrack – or The Lion King or Futurama, depending on which sections you really pay attention to.

The question is, how much would cost to fly the orchestra over for Download next year?

System Of A Down join Biffy Clyro and Aerosmith as the headliners of Download 2017.