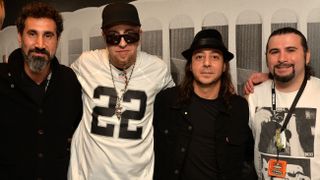 System Of A Down (Image credit: Getty)

System Of A Down drummer John Dolmayan says the band have 15 new songs in contention for their sixth album.

Dolmayan reveals System Of A Down have been working on the follow-up to 2005’s Hypnotize for the last six months and admits they are feeling the pressure as they approach 12 years since their last studio release.

He tells Kerrang: “We’ve been working on a new album for the last six months and there’s about 15 songs that I think are album-worthy.

“We don’t know what’s happening in terms of release, it’s still not 100% as far as plans go.

“I want everyone on board and feeling good about it, that’s what we’re trying to accomplish right now. There’s a tremendous amount of pressure on us, though, because it’s been 11 years – at least 12 by the time it comes out.”

Dolmayan adds that Download 2017 headliners System Of A Down won’t try and create “Toxicity Part Two” and insists they want to attract a new generation of fans.

He says: “Our playing ability is better than it ever has been and we’re trying new things. We’re not trying to make Toxicity Part Two, just because it was by far our biggest album.

“This needs to be something for a new generation of SOAD fans, so everyone can see we’re not resting on our laurels. I’m not gonna put my name on an album I’m not 100% proud of. I know there’s a lot of talk, we read a lot of it – trust me.

“The fans are saying a lot of things, we understand their frustration and the fact it comes from a place of passion, for the most part. SOAD is definitely making an album, we just don’t know what terms it will be made on.”

Last month, SOAD released video footage of them rehearsing. They have a string of festival dates lined up for 2017.

What do old people think of System Of A Down?