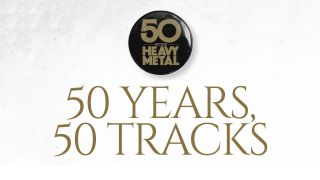 In the summer of 1969, an upcoming Brummie band played their first gig under the name Black Sabbath. It was the start of heavy metal as we know it.

Half a century on, we look back at the shit-kicking, amp-blowing songs that built the genre – from it's grimy, industrial beginnings through NWOBHM, thrash metal, nu metal and the rest – and chart its history with our Ultimate Heavy Metal Spotify Playlist.

It began with the dank drubbing of rain and the distant toll of a church bell. Then, with the mood established, Black Sabbath opened their studio account, Tony Iommi’s funeral-pace riff humming with sin and Ozzy Osbourne’s spooky observations of a ‘figure in black which points at me’ still making you check over your shoulder. Metal was born, right here.

Sir Lord Baltimore drummer/vocalist John Garner wasn’t messing around; he sounds like a man seriously damaged by affairs of the heart on this rip-roaring, guitar-freaking killer.

The bludgeoning low-end bass of Budgie's Burke Shelley combined with the slow, Sabbathy groove of Guts makes this song a must-inclusion in the collection of any heavy hairy freak.

The future of metal was changing, and Judas Priest were going to be at the forefront of it. They may not have realised it at the time, but Rob Halford’s vocals would go on to influence a future generation of screamers. A heavy metal shock of the very best kind.

Steppenwolf might have sung about ‘heavy metal thunder’ first, but the song that illustrates it best has got to be Lemmy’s relentless ode to cards, dice and dancing with the Devil. Gambling may be for fools, but with a soundtrack like this, it’s the way we like it, baby…

With a riff that launched a thousand identi-riffs, the title track of AC/DC’s first record with Brian Johnson at the mic was a terrifying statement of intent. The chord stabs can’t be argued with, and Angus wows us with two guitar solos. As a metal anthem it’s oft copied, never bettered.

"I got something to say, I killed your baby today…’ A Dave Vanian-style vocal, plus a Ramones-style backing track and a handful of very sick lyrics, and horror-punk is born. Future members of Metallica and Gun N' Roses vow to cover Misfits songs when they grow up.

Barnsley stormers Saxon shook up the NWOBHM with this strident track which harked back to the golden age of Motorhead and AC/DC. It also had a contemporary sound, thanks in part to an in-yer-face production that enhanced its overall power.

Having been ousted from Black Sabbath, Ozzy went on to release a debut solo single that proved he was still worthy of his Prince Of Darkness title. Teaming up with guitarist Randy Rhoads, Crazy Train fused a bass line reminiscent of Papa Was A Rolling Stone with one of metal’s greatest guitar solos.

Geordie guttersnipes Venom somehow contrived to invent not one but two all-new music genres: death metal and (as heard on this stomach-turning track) black metal. No one had ever heard music like this before. No one ever wanted to again. But, inspired by the antics of Cronos and co, hundreds of like-minded bands would soon spew forth.

Iron Maiden - The Number Of The Beast

The title track of the first Iron Maiden album to feature Bruce Dickinson on vocals set the metal template that the Irons would take to record-breaking levels over the following decades. Adrian Smith and Dave Murray’s interlocking six-strings showed the world that twin-guitar bands didn’t have to sound like Thin Lizzy, while Dickinson’s air-raid siren howl and ’Arry’s thunderous bass sealed the deal.

Diamond Head - Am I Evil?

Made internationally popular by Metallica, this track is oddly one of the foundations on which the thrash genre was built. Oddly? Yep, because Diamond Head owed more to Led Zeppelin than to Motorhead. However, Am I Evil?, with its pace, power and dark intent, would be the blueprint for much that was to happen in the 80s.

Kiss - Creatures Of The Night

Kiss had lost their way somewhat over the previous few years, but this put them right back on track as one of the greatest anthemic bands of all time. Here was a song with a mighty riff and a massive chorus, reinvigorating their appeal to the metal audience both new and old.

After successful spells with Rainbow and Sabbath, Ronnie James Dio strode out on his own, making a formidable statement with the title track of the first Dio album. It encapsulated everything that had made his name – articulate lyrics, a mythically inspired melody, a soaring vocal plus a stirring guitar.

Without a doubt this is the defining song of the unsquashable German band’s lengthy history. It’s a bold, powerhouse march, mixing a potent tune with intense musicianship – one of those songs that helped to give big-hair music such a massive chart-busting boost.

There’s no trace of misty-eyed romanticism here as WASP turn the act of making lurve into a base, animalistic affair. Fuck Like A Beast tested the boundaries of metal’s decency and found them wanting. The irony was that when Kerrang! featured Blackie Lawless on its cover, WH Smith banned the issue because the singer was covered in blood – not because he was promoting the use of the F-word.

Killing Joke put the titanic might of Zeppelin and the riff-propelled metal doom of Sabbath through a hyper-cranked punk’n’funk filter to create a roaring apocalyptic holocaust. Latterly, Kurt Cobain translated its signature, grunge-presaging riff into Nirvana’s Come As You Are.

When Chuck Mosley pseudo-rapped that his generation did indeed care about ‘disasters, fires, floods and killer bees’ and the ‘NASA shuttle falling in the sea’ over the punchiest slap-bass riff we’d ever heard – cannily punctuated by ‘Big’ Jim Martin’s razor-wire guitar – it was the first indication that funk and metal could cheerfully co-exist.

Slayer scared the mainstream to death with Reign In Blood, and the album’s opening track is terrifying. Marrying contentious lyricism (the tale of Nazi doctor Josef Mengele) to the most deafening soundtrack, the LA thrashers redefined what being a metal band meant. It was faster, meaner and more brutal than anything that had gone before.

Anthrax weren’t the first metal band to immortalise a comic-book hero in their lyrics, but this almost funky homage to Judge Dredd was a magnificent evolution from their more straight-ahead thrash origins.

‘The first word in death metal,’ ran the band’s tagline. And it was true. Revolving around the fevered muse of the late Chuck Schuldiner, this exemplary track brought in a native, stultifyingly humid atmosphere that spliced throbbing bottom end to thrash’s speed, bringing about new realms of lascivious horror.

Queensryche’s concept album Operation: Mindcrime is the record that has been the benchmark for prog metal ever since. Stranger combined intelligent lyrics and complex music – including a brilliant twin-guitar line – yet still provided the opportunity for a damn good headbang.

Its lyrics a mix of insightful prediction (‘Nowadays the air’s polluted, that’s what mankind contributed’) and the ludicrous (‘In the sky a mighty eagle doesn’t care ’bout what’s illegal’), Helloween fine-tuned a pre-existing template to make it better still. Sung in impossibly high-pitched tones by Michael Kiske, Eagle Fly Free addressed issues of self-empowerment, individuality and authority’s foolishness before signing off with an uplifting farewell of ‘Together we’ll fly someday’. Brilliant.

From Nine Inch Nails’ debut album Pretty Hate Machine, Head Like A Hole’s driving yet nasty rhythm put Trent Reznor’s breathtaking ethos of combining electro and industrial sounds within a slamming metal song into perspective. It introduced a new audience to industrial music, and inspired the likes of Marilyn Manson.

One of the iconic bands who helped to shape the 1990s, Alice In Chains had a unique sound – melancholy yet also uplifting. This first single from their debut saw the Seattle masters at their prime. It was clever, slightly perverse and all-enveloping, its detuned Sabbath-esque sludge tempered by a stunning melody, while Cantrell and Staley’s call-and-response vocal lines on the chorus would set a template they’d utilise throughout their career