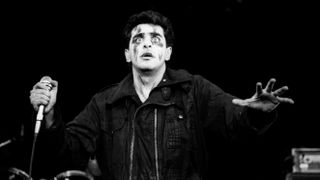 Killing Joke formed in Notting Hill in 1978. Over the course of their career, the post-punks have released 15 studio albums, seven live albums, five EPs and 31 singles and have influenced the likes of Nirvana, Metallica, Ministry and Faith No More.

We challenged Gould to pick the 10 definitive Killing Joke tracks. After some deliberation, here’s what he selected…

I was 16 the first time I heard Killing Joke. Chuck Mosley, our old singer, was the guy who turned me onto them. I didn’t like Requiem the first time I heard it. It sounded like Rush to me. It took me about three months before I got it. Then I really got it and I think it’s one of the top 10 influential albums of all time. It has groove, it’s heavy. It has it all.

This was my gateway into Killing Joke. It was a little more straight forward and at the time, I was more into punk music. This is from a 12-inch they released, and it sounded big and fat. It’s a great song.

This is from their album What’s THIS For…! and it starts with a dog barking. It’s a great song, but that whole album is amazing.

This is a great song from their album Revelations. It was interesting to see a band who were kind of extreme get some commercial success and how their attitude was like towards that. To me, it was like Faith No More’s Angel Dust; a darker, weird kind of record that you have to get into a little bit and digest.

Let’s skip around and not go in chronological order. I think The Death And Resurrection Show is fucking killer. That was the third time that they surprised me. I listened to something new by them and it totally kicked my ass.

MONEY IS NOT OUR GOD (Extremities, Dirt and Various Repressed Emotions, 1990)

Great. Great. Great. Great. This was the second time they blew me away. I was on tour. We were touring the States and were on the bus. Someone picked up the new Killing Joke album and put it on. When I heard it, I was like, ‘They did it again’.

This is great. Great textures and layers. There was a time when Geordie [Walker, KJ guitarist] played with us to see if it would fit, post Jim Martin. Geordie is probably the coolest, best guitar player I can think of. He’s a natural. I would say his personality is so strong that he dwarfed us. For Faith No More, it wasn’t the right thing but I wish it would have been. He’s amazing. His layering and tone and arrangements are absolutely brilliant.

I like this song, even though it was a single. With that album, I thought they were getting into Adam And The Ants territory. It’s a great record and I liked they went in a totally different direction. It was a little more upbeat and this was a badass song.

This is a live version. It’s great and it is what it is. It’s solid. To me, they’re a force of nature live because I know the intention they put behind their songs. I absolutely get that. It’s funny, even though they sound nothing like them, Meshuggah remind me of Killing Joke. They used to call Killing Joke ‘the sound of nature vomiting’. Meshuggah like that.

All of the songs on that first album are brilliant. Change has a funk groove. I grew up in LA and used to work in South Central, so Parliament and a lot of funk music was there. I was a delivery boy, so I heard it a lot in my car. I was into punk music, so I’d see bands like the Germs and Black Flag. So these were two worlds I couldn’t reconcile but a song like Change made me see how they could fit together.

Ten Things You Might Not Know About Killing Joke