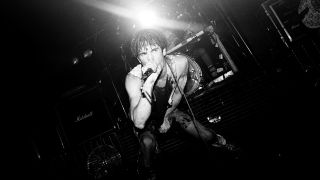 You’ve never seen Trent Reznor and Batman in the same room, have you?When the Nine Inch Nails captain was revealed as the music consultant for video game Batman: Arkham Knight back in 2015 we too the chance to look back on the breadth of the industrial legend’s CV. Obviously, ‘being Batman’ isn’t on there – he wouldn’t tell anyone that, would he?

He’s Ensured That No-One Will Ever Run Out Of Songs To Cover
First and foremost, Trent Reznor is an incredible songwriter. No matter what genre, any artist can cover a Nine Inch Nails song. Johnny Cash famously re-recorded Hurt and, if it’s good enough for the Man in Black, you can’t knock it. Sleazy sex anthem Closer was covered by Asking Alexandria, and its refrain was played upon in Limp Bizkit’s Hot Dog as some sort of diss. Let’s not forget Wish, mind you; it’s the first Grammy-winning song to contain the phrase ‘fist fuck’, and it’s been aped by everyone from Behemoth to Linkin Park and The Dillinger Escape Plan to Brand New. Basically, a lot of people like Nine Inch Nails.

He Gave Us Marilyn Manson
Trent was certifiably hot shit following Pretty Hate Machine and Broken and, in 1993, he signed a new band to his label, Nothing Records. That band was Marilyn Manson; Trent proceeded to invite them on tour, expose them to a previously unreachable audience, produce their debut and – more importantly – the monolithic, self-loathing masterpiece that is Antichrist Superstar. Aside from this, Mr. Reznor has produced the likes of Jane’s Addiction and Saul Williams, and he’s even had a crack at remixing a Puff Daddy tune.

He Embraced The Digital Scourge
Metallica’s spirited battle with those pesky file-sharers at Napster pretty much signalled the end of artistic control; Napster was thwarted and has since been eviscerated by the spear of justice, but illegal downloading hasn’t exactly gone away, has it? Trent has snuggled into the digital age with ease, learning the value of his fans’ wants and needs in the process. The first nine tracks from Nine Inch Nails’ ambient opus Ghosts I-IV were available for free, with the remaining 27 songs up for grabs at a measly $5. Various fan packages were on offer and, in the first week of its release, Ghosts I-IV raked in $1,619,420 and was followed by The Slip – also available for free – which climbed to #13 on the US Billboard charts.

He’s put out music under the How To Destroy Angels moniker, which fans could also snap up for nought. By marketing his music as, essentially, an advertisement for touring, Trent has tapped into the collective cranium of his fanbase and realised that there are two types of people: those who buy music and those who don’t. He appeals to both.

He’s Penned An Oscar Winning Score
Collaborating with Atticus Ross, Trent laid down the blippy, seamless soundtrack to The Social Network; it was commended for its sheer assimilation with the film’s overall aesthetic and went on to beat Hans Zimmer’s Inception score at the Oscars. Remember that Zimmer is the soundtrack guy – his fearless organ playing even saved last year’s crumbling turd of a blockbuster, Interstellar – so this was a true victory for Trent and Atticus. The duo also bagged a Grammy for their work on The Girl With The Dragon Tattoo and tampered further with the sonic landscape of last year’s Gone Girl.