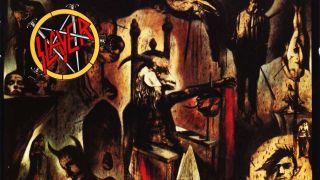 On October 7, 1986, Slayer released their third album. Heavy music would never be the same again. Reign In Blood is not just a classic metal record, it’s an ageless masterpiece that has influenced thousands of bands over the last 30 years. Just under 29 minutes of breakneck savagery, infernal proclamations and a near-chewable sense of barely-controlled chaos, it both defined Slayer’s trademark sound and upped the ante for the entire thrash scene, inadvertently inspiring a generation of like-minded reprobates to take metal ever further into the hissing drool-pits of Cthulhu’s pitch-black maw. One of the most revered metal albums ever made, it doesn’t have any obvious weak points, but let’s put its 10 monstrous tracks in some kind of preferential order anyway, shall we?

Let’s be honest about this: Reign In Blood is basically flawless and even its less celebrated tracks make the vast majority of everything else that’s ever been recorded sound a bit shit. That said, there has to be a loser and despite Dave Lombardo’s utterly glorious drum intro, Epidemic is the obvious choice for the album’s least memorable moment. Admittedly, it’s still pretty fucking memorable – particularly the bit when Tom Araya yells ‘Death machine, infest my corpse to be!’ – and full marks to Kerry King for getting the word ‘pulmonary’ into a metal song.

Songs about witches and the occult are nearly always marvellous, but seldom as remorselessly face-mangling as Reborn. Only a total bellshiner would accuse Reign In Blood of having a mid-album slump, but for those who remember the original vinyl pressing will doubtless have observed that Side Two was slightly less devastating than Side One. Despite being overshadowed by the album’s more obvious highlights, Reborn is notable for the golden moment when Tom Araya snarls ‘Defy your morbid declaration/Leave you ripped and torn…’ and then Jeff Hanneman lets rip with a disgustingly evil solo. It’s well good.

One of the fastest tracks on Reign In Blood (which is a feat in itself), Jesus Saves is one of Slayer’s best ever “Christianity is a load of old hokum” songs, and it deftly brings the first half of the album to a breathless, violent close. As observant fans will know, Slayer effectively glued this song and Altar Of Sacrifice together, ensuring that their third album was genuinely unrelenting. Of the two, Jesus Saves is the more straightforward and doesn’t have quite as many references to Satan in it, hence its position in this list.

Is there anything better in all of recorded history than the moment when Tom Araya howls ‘Welcome to the realm of Satan!’? It’s a rhetorical question, so don’t panic. Either way, Altar Of Sacrifice is the ultimate paean to Lucifer-pleasing ritualistic murder and is bolstered by no fewer than three ear-slicing Jeff Hanneman solos. It’s also worth noting that the closing lines – ‘Watching the angels sift through the heavens/Endlessly searching for salvation’ – are actually quite poetic, at least by thrash metal standards.

Released as Reign In Blood’s only single – albeit in a most peculiar remixed form, wherein some of Dave Lombardo’s frantic drumming had been mysteriously erased – Criminally Insane is definitely not radio-friendly. Instead, it’s 143 seconds of glowering, hyper-violent thrash metal that proved exactly how mental Tom Araya can sound when he puts his mind to it. ‘Night will come and I will follow/All my victims, no tomorrow,’ he spits, later noting that he has ‘only just begun to take your fuckin’ lives!’ Thirty years on, it’s still a huge, jolting shot of adrenalin, with added crazy.

The shortest track on Reign In Blood is also the most vicious: just over one-and-a-half minutes of furious, high velocity clatter accompanied by a deeply unpleasant shopping list of ways to die horribly. If that wasn’t entertaining enough, it also has an actual chorus, albeit one that goes ‘Ripping apart, severing flesh, gouging eyes, tearing you limb from limb!’, so we’re still not exactly in sing-along territory (but sing along anyway, obviously).

Arriving immediately after the greatest opening track to any metal album ever, Piece By Piece could easily have paled into insignificance. Fortunately, it’s one of Slayer’s most subtly inventive thrashers, with a laudably demonic opening riff that sounds like a swarm of descending evil angels swooping down across a offal-strewn battlefield. When it’s fast, it’s fast as fuck. When it’s slightly less fast, it still sounds like a genuine and terrifying threat. There’s only one way out of here…

Just listen to that opening riff. Holy fucking Beelzebub. Slayer have always prided themselves on their ability to be much, much nastier than their peers, and Postmortem confirmed that the band’s nastiness was as present in their music as it was in their twisted, confrontational lyrics. Made even more thrilling by the fact that dedicated Slayer fans will listen to it knowing exactly what’s coming next, it’s one of the greatest things Jeff Hanneman ever wrote and the perfect run-up to the malevolent mother of all album closers.

‘Raining blood! From a lacerated sky!’ If you’ve never watched Slayer perform and screamed along with this, you should probably hand in your metal licence sharpish and download some Jake Bugg tunes instead (but, you know, don’t). From that eerie, tense intro to the eruption of hellish chaos that brings song and album to a close, Raining Blood is simply a milestone in the evolution of heavy metal. On any other album it would be an obvious No.1.

When a generation of young metalheads heard the first track on Reign In Blood for the first time, it immediately altered the entire landscape of our chosen musical world. Angel Of Death is perfect: that scything, sinister opening riff, Tom Araya’s never-to-be-repeated scream, that opening line (‘Auschwitz, the meaning of pain!’) and then the sustained combination of Jeff Hanneman’s litany of lyrical horrors and the most exhilarating series of riffs ever committed to tape… let’s just say that metal bands have spent the last 30 years trying to produce something even half as destructive, mesmerising and shocking as this, and no one has come even remotely close. At least nine out of 10 infamous butchers agree, incidentally.