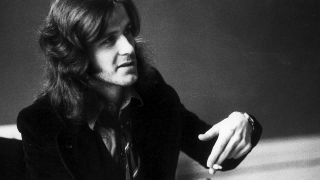 John Wetton was born in 1949 and played with a variety of bands including Family, Mogul Thrash, Uriah Heep, Roxy Music, Wishbone Ash and King Crimson.

He went on to form prog supergroup UK and following their split in 1980, he teamed up with Geoff Downes, Steve Howe and Carl Palmer in Asia. They released their self-titled debut album in 1982, with Wetton becoming the band’s principal songwriter.

Wetton would later team up with Downes in Icon and along with playing with artists including Brian Eno, Phil Manzanera, David Cross, Ayreon and District 97, he also enjoyed a successful solo career.

An early example of Wetton in action, from Family’s Fearless album in 1971. His role here wasn’t especially prevalent, but he does make his presence felt with deft touches on bass and other instruments. It cannot have been easy fitting into such an established band so early in his career, but the man took it all in his stride.

An instrumental from the Larks Tongue In Aspic album that allowed Wetton to showcase both his flexibility and dexterity. While his work here was never brought right to the fore, what Wetton did was complement the virtuosity of others. It was one of his greatest strengths to be able to fit into any playing style, without seeming to break sweat, and here we can appreciate just why he was so invaluable to Crimson.

On this track from Eno’s 1974 album Here Come The Warm Jets, Wetton displayed a relaxed capacity for getting slightly funky. His bass contribution could have been swamped by the busy mix of almost bonkers instrumentation around him, however Wetton just carried on regardless and you can hear him deftly keeping everything in perspective. Even in his younger days, he was acting as a much needed anchor for the swirl surrounding him.

A chance for Wetton to prove that his vocal nuances were an able part of the Crimson canon on the Red album. His lyrics were evocative, fitting confidently into the flowing musical passages. And his bass lines rose from a rhythmic timbre to a much more upfront place in this epic treatise. It’s on tracks such as this where Wetton brought a benign melodic inference to bear on the band.

UK – In The Dead Of Night

Wetton never sounded or looked out of place in such august company as UK. In fact, he was something of a guiding light on a track as this from the band’s self-titled 78 debut, where his lyrical intelligence and a talent for getting his voice to fit what was going on around him was brought to the fore. Wetton was content to allow others to gain the plaudits, but on a song like this he was crucial to UK.

Wetton was a quite brilliant bassist. But he was could also turn his hand to other instruments as well. On the title track from the second UK album in 1979, he showed an expressive connection to the guitar, as well as handling all the vocal parts. Never one to be seen as a instrumental god, nonetheless his guitar work here is certainly of the highest order, and is not out of place in such high calibre company.

John Wetton – Turn On The Radio

In 1980, Wetton released Caught In The Crossfire, his first solo album. And a song like this gave him the opportunity to really blossom in all his glory. Every elements of his talent was on show here, from the exhaustive progressive instincts to an appreciation for overtly melodic sequences. He handled all aspects with aplomb and dynamism. A precursor to what would happen with Asia.

Asia – Heat Of The Moment

One of the best known songs of the early 80s, this supergroup really came into their own here. And Wetton is the fulcrum of all the melodic rock activity. It wasn’t easy to balance the need for displaying progressive tendencies while being commercial. However, thanks to Wetton’s brilliant vocal outpouring, this was supremely achieved by Asia with this 1982 hit.

The band’s third album, 1985’s Astra, is often overlooked. But this song is one reason why it should be treasured. Because it gave Wetton a welcome chance to let rip vocally, proving there was a lot more to his range than being a soft focus balladeer. And his bass lines are mesmeric. He had an all round edge here.

The title song from Wetton’s 1994 solo album (which was originally released as Voice Mail), and it brings out the way in which he could be both wistful and sharp at the same time vocally. Wetton’s multi-instrumental capacities were again in evidence, and the nostalgic breadth and depth of song suited his passion for visiting the past, but only to draw inspiration.

It can never be easy to tackle a song so associated with a particular vocalist. But in 1996, on Steve Hackett’s version of the Genesis classic, Wetton superbly nodded affectionately towards the Peter Gabriel original, while bringing his own palette to bear. And he also provided some supple bass work into the bargain. His performance was imaginative, yet never overshadowed the importance of the music.

Wetton And Downes – Let Me Go

From the pair’s 2005 Icon album, this gave Wetton a welcome chance to show off his church choral roots. Here was an influence he always maintained was vital on his career, and you can hear it coming through on Let Me Go. The lush way in which he merged multiple vocal harmonies, without ever going fully overboard, was a lesson in the way Wetton had a innate respect for the power of the voice in music.