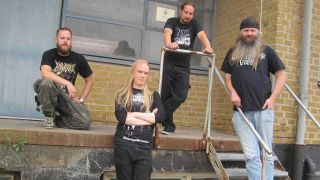 Even these days, when Swedish death metal is an instantly recognisable force, some locals just won’t have it. No matter how much easier their passports might make their lives, some bands just don’t want to go down that well-trodden (left hand) path, preferring instead to follow their own road. So, here’s a list of ten Swedish bands whose brand of death metal just doesn’t sound that Swedish at all…

Between 1994 and 1999, as Defaced Creation, they tried their best at channelling Deicide’s anti-Christian message. Four of their five members went on to form Aeon, and set out to reach the exact same goal, albeit in a slightly more refined yet in-your-face way. Even Alex Webster from Cannibal Corpse is a fan.

Crypt Of Kerberos (from Eskilstuna)

Once described as ‘Nocturnus with Yngwie Malmsteem on lead guitar’, this lot started off by emulating the down-tuned dirge of local heroes Eternal Darkness, which soon morphed into highly melodic dark prog with (sometimes) shrieked vocals, and their sole 1993 album World Of Myths became a minor underground hit. After over 15 years away from the scene, they reunited in 2010 and have been working on their reunion album ever since.

The longest-serving soldier on this list (despite a short split in 2009), Deranged have been brutalising crowds with their unsubtle, barbaric, US-influenced take on death metal for years. Even future Arch Enemy founder Michael Amott’s contribution to three of the five tracks on their debut Architects Of Perversion didn’t urge them to tone down their attack, and they’re about to unleash their ninth full-length, Struck By A Murderous Siege, later this month.

Insision eventually became famous for being the go-to band of bass player Daniel Ekeroth – author of the Swedish Death Metal book – for over ten years. But when Earache signed them back in 2002, it was because of their technical but lethal form of death metal, which had more in common with Suffocation than with Dismember. Ekeroth is long gone and so is their contract with a ‘big’ label, but they’re still around kicking teeth.

As proven by their weird song titles (Castrated By Children, Revenge Of The Hermaphrodite Whores, Lady Gagball etc.), these lads seem to have a pretty dysfunctional way of looking at human interaction. And they love pitched vocals and blastbeats. This can mean only one thing: this is grindgore at its filthiest.

When you have Stratovarius’ latest drummer and vocalist extraordinaire Christian Älvestam – capable of effortlessly switching from deep growls to soaring melodic vocals like Mikael Åkerfeldt in Opeth’s heyday – in your ranks, you know you’re not going to get your typical Swedeath dose. After a convincing debut, they’ve released two more albums where they sound like the bastard child of Scar Symmetry (whom Älvestam used to sing for) and, well, Stone Sour.

It’s little wonder why wonder Soreption are on Unique Leader records – the go-to place for technical and triggered-as-fuck death metal, run by Deeds Of Flesh’s Erik Lindmark – as they’ve nailed the pinched harmonies and stop-and-go style popularised by bands like Decapitated or Psycroptic.

Spawn Of Possession (from Kalmar)

Initially just a distraction for the then Visceral Bleeding drummer-turned-vocalist, this is totally OTT technical death metal – the Swedish equivalent of Necrophagist, if you will – with German guitarist and former Obscura member Christian Münzner in tow. They’ve been pretty quiet since their last album (2012’s Incurso) but are said to be working on their next assault, to be released sometime next year.

While their now out-of-print 2008 debut was by-the-book, predictable old-school death metal, Vanhelgd have come a long way since then. Incorporating doom and black influences for a cinematic result (no wonder their leader Mattias Frisk has made a name for himself as a talented graphic designer), this year’s Temple Of Phobos is a particular highlight.

All you need to know about this band is that they were kickstarted in 2000 by two Spawn Of Possession members, and that their debut 2005 reissue included a raging cover of Cannibal Corpse’s Stripped, Raped And Strangled. Although they’ve been quiet since 2007, they’ve released three ridiculously brutal albums worth checking out.

The 13 best death metal albums of the decade so far