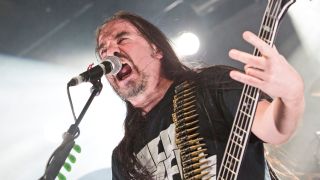 Ahh death metal. Chances are this extreme metal subgenre wasn't your introduction to heavy music, in fact, if it were, it's likely you screamed and ran the other way.

Most of us start off with something more accessible, like good old fashioned heavy metal, perhaps a little punk rock, maybe even thrash... but as your love for metal intensifies it's only natural that you'd head to the more extreme, right?

Well, if you are still yet to explore this most aggressive form of metal, and you have no idea where to start then give this a read for a quick education of the best songs – so at least you won't look like a massive poser when you turn up at Deicide's next gig, eh? Honestly, mate, it's not as scary as it sounds...

While it would be perfectly reasonable to attribute the birth of death metal to any number of mid-80s bands – Slayer, Possessed, Celtic Frost, the usual suspects and a handful of obscure ones – the genre’s most obvious starting point is the emergence of Chuck Schuldiner’s Death. Chuck did more than anyone to hasten death metal’s popularity and progress and while the band’s later records were truly groundbreaking, it was early albums like Scream Bloody Gore and Leprosy that first defined that bloodcurdling mixture of brutal riffs and animalistic bellowing.

Routinely proclaimed the greatest death metal album of all time – and rightly so – Morbid Angel’s 1989 debut, Altars Of Madness, set the bar so high for the entire genre that people are still trying to match its ignominious splendour 25 years later. From Trey Azagthoth’s churning, otherworldly riffs to Dave Vincent’s peerless growls, Morbid Angel’s idiosyncratic approach and progressive mindset set them apart from their peers while refining and celebrating the spirit of death metal and, perhaps more importantly, musical extremity in general. Still untouchable.

Autopsy – Torn From The Womb

Masters of the grotesque, purveyors of filth, lords of gore and THC-ravaged servants of hellish disgust, Autopsy sounded like no-one else when they slithered from the grubby Californian shadows into the death metal spotlight at the tail-end of the 80s. Their second album, Mental Funeral, is a masterpiece – a repulsive onslaught of clattering aggression and lumbering doom that tapped intuitively into metalheads’ love of horror, inspiring a whole generation of red-eyed miscreants to strap on guitars and unleash hell.

As seminal and enduring as any comparable American band, Entombed brought the buzzsaw guitars and Discharge-fuelled punk intensity of the Stockholm death metal sound to the world’s attention. Alongside early efforts by Grave, Dismember and Unleashed, Entombed’s debut album Left Hand Path defined Sweden’s unique take on the genre’s nascent formula, injecting a dash of diversity and rock ’n’ roll swagger into the world of extreme metal. If you’re a fan of contemporary filth merchants like Black Breath or Skinfather, you need to check out the original source of all that crusty bluster.

With a sound that drew as much from the brutish breakdowns of New York hardcore as it did from the metal scene, Suffocation facilitated the manifesting of ‘brutal death metal’ as a distinctive subgenre in its own right, perfecting the formula at the first attempt on their debut EP Human Waste and then obliterating all-comers on its 1991 full-length follow-up, the ageless Effigy Of The Forgotten. Still regarded as one of the most remorselessly brutal bands on the planet, Suffocation are simply the undisputed kings of this stuff and every guttural growler on the planet owes vocalist Frank Mullen a drink or three.

(taken from Necroticism – Descanting the Insalubrious, 1992)

You may have noticed a widespread outburst of excitement when Carcass returned last year with the masterful Surgical Steel.

British death metal has never had an easy ride, but back in the early 90s, these anatomically precise ne’er-do-wells were setting the deathly rulebook ablaze, outgrowing their earlier status as grindcore pioneers and imbuing their trademark sound with jolting doses of traditional metal melody and razor-sharp song structures.

Fortunately, Cryptopsy were on hand to breathe new life into the blast ‘n’ growl blueprint, reaching an apex of technical wizardry and forward-thinking fury as a new century dawned, on the dizzying …And Then You’ll Beg.

The significance of this band’s impact can be witnessed via today’s ever-expanding surfeit of obscenely skilled extreme metal musicians, but few modern bands have matched the Canadians’ outrageous intensity.

Often cited as the biggest death metal band of them all, Cannibal Corpse may not always have been the most musically inventive band in the scene but they continue to set standards for ferocity, lyrical perversion and stomach-churning imagery and no credible death metal collection is complete without at least one of their albums. For many die-hard fans, the band’s 2006 album Kill represents an offal-drenched high point in a huge and consistent catalogue and Make Them Suffer slays like a meth-fuelled, knife-wielding psycho. Hail the Corpse!

(available as a single only)

Formed in 1983 in Wellsville, Ohio, Necrophagia were one of the very first bands to combine vicious metal with horror imagery, even managing to release their debut album – 1987’s seminal Season Of The Dead – three months before Death unveiled Scream Bloody Gore. Since then their activities have been sporadic, but when it comes to serving up skull-shattering heaviness with a lust for the macabre, they remain laudably unassailable. Plus, founder member and vocalist Frank ‘Killjoy’ Pucci is a towering authority on horror cinema and culture, which just makes him and his band even more metal. And awesome.

Check out our Bluffer’s Guide To Black Metal here.