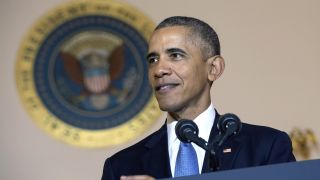 Leaders of Denmark, Finland, Iceland, Norway and Sweden attended the White House conference when the US President joked that the genre’s popularity may have contributed to the country’s political landscape.

He says: “I do want to point out that Finland has perhaps the most heavy metal bands in the world per capita and also ranks high on good governance. I don’t know if there’s any correlation there.”

Many argue that the country’s cold, dark climate during winter may influence people’s moods and, thus, their taste in music.

A Metal State Of Mind says: “When someone is surrounded by cold and dark for long periods of time, it is only natural that some form of depression will start to set in. I can’t think of one form of music more tailored to the release of the negative more than metal.”

But university lecturer Titus Hjelm says that the genre’s enduring popularity in Finland is simply due to metal bands being the country’s first international breakthrough acts. While Finland “lagged more than two decades behind Swedish popular music,” bands such as Stone and Children Of Bodom were among its first successful musical exports in the 80s.